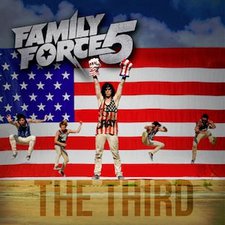 In fall of 2011, Family Force 5 dropped their most divisive project to date with III. While a solid mix of the both the sounds from Business Up Front, Party in the Back and Dance or Die, it was an understandable continuation of the fun and crazy sides of the quintet. Where the album faltered, however, was in the sensual direction of some tracks that kept the party a little less innocent than past precedent. But with time and reconsideration, artistic statements can be modified, and hence, The Third, the re-release of III, is officially here.

When it comes to re-releases, the question is always: "why?" What makes The Third necessary? Most notably, the troublesome tracks "Mamacita," "Tank Top," and "Dang Girl" are nowhere to be found on this re-release. Instead, previously heard tracks "Cray Button," "Zombie," and "Superhero" take over the spots in the tracklisting, and the good news is that they fit the album's concept reasonably well. Some could be disappointed that this re-release doesn't feature any truly new tracks here, though this version of "Cray Button" features a skilled, but quick, guest spot from Lecrae. On top of that, save for the opening song "Can You Feel It," the order of the tracks has been rearranged for aesthetic quality and flow, appropriately leaving the ballads "Superhero" and "Not Alone" to close out the album in good fashion.

With plenty of strides forward, The Third was more than worth the construction. But the fact remains that this set of songs isn't FF5's strongest of their career. When compared to the polished efforts of the band's first two albums, The Third doesn't impress easily; the dance described in "Wobble" is still silly, "Get On Outta Here" still feels like a mean-spirited insult to the unnamed party crasher (even if Satan is the supposed party guest being ridiculed), and "You Got It" still has tinges of uncomfortable women-ogling that are too close for comfort. While the changes on The Third are absolutely welcomed, they don't save the album completely, and the band's best material is still largely behind them. Still, it maintains a very bright future for the band, and those disconcerted (or even disgusted) with III have reason to get back on the party's wagon.

Put shortly, The Third is the true third full-length album from the kountry gentlemen that listeners have been waiting for; for listeners who (perhaps wisely) passed on III the first time, The Third is a re-release worth spinning. While the record is still far below the caliber of its predecessors, it rectifies most of the stirring problems that III suffered from, and it keeps FF5 fans rightly excited about the band's future direction... and the band's next project is still worth hotly anticipating. The party goes on!