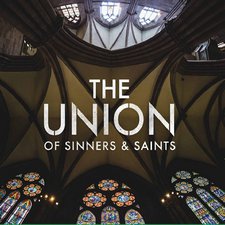 
Petra and White Heart. Two of the most well-known Christian bands from the 80's and 90's, and arguably the most popular Christian arena rock bands of all time. Neither band makes music anymore, but the former members of both (or, at least, several of the dozens) have been active throughout the years. But last year former Petra lead singer John Schlitt and former White Heart guitarist Billy Smiley started writing songs together, and that collaboration grew into a partnership and then into a full band. They recruited two other former White Heart members, drummer Jon Knox and bassist Anthony Sallee, and then filled out the rest of the lineup with Jonathan Crone and Jason Fowler, and called themselves The Union of Sinners and Saints. The band's self-titled debut album mixes a little old with a lot of new, and breathes new life into the classic arena-rock sound both bands were so well-known for.

First of all, let it be known that of all the music from the 80's and 90's, arena rock might be the most dated. There are only so many times you can use the word "soaring" as an adjective in music ("soaring vocals," "soaring chorus," "soaring guitars," etc) before it just gets tiring, and arena rock soared enough to put all other music to shame. But USS pulls off the extraordinary achievement of giving Petra and White Heart fans just enough soaring arena sounds to tickle their nostalgia, but stopping short of sounding like yesteryear. This is a thoroughly modern-sounding record, with modern production, modern instrumentation, and modern experimentation. In truth, one need never have heard of Petra or White Heart to appreciate the full, driving guitars, strong percussion, Schlitt's sweetly gravely vocals, or any of USS's other aesthetic appeals (though that's not to say it doesn't help if you have). Indeed, the guitar work alone might be enough to win over any listener. Smiley, Fowler, and Crone all share duties (often at the same time), but the recording sessions also featured an ensemble of guitarists like White Heart's Brian Wooten and Dann Huff, Petra's Bod Hartman and John Lawry, Billy's son Brennan, and the legendary Phil Keaggy (even Michael W. Smith and Peter Furler also make studio appearances on the B3 organ and drums, respectively, and John Ellis's voice shows up on "The Things You Do"). Throughout the whole album, whether it is crafting a hook, chugging, breaking down, soloing, or simply soaring, the guitar work is all on point, and the production quality enhances the overall effect.

The one thing that can feel dated at times is the lyrics. For sure, there are definitely highlights like "Brother to Brother" ("From a man who has learned through many years / To the one who will face uncertain fears / We stand  Brother to Brother"), the touching "Lone Soldier," or the wisecracking Smiley/Schlitt/Furler number "Old Guys Rule." But then tracks like "Now Not Never" remind us of that old, awkward Christian music cliché of rephrasing common idioms into evangelical messages (in this case, "now or never" becomes the song's title). A few other songs also suffer from the lyrics feeling dated (in the case of "Beyond Belief" and "Independence Day," this is actually because they were written in the 90's), but I must be careful not to overstate myself; these songs have good and thoughtful lyrics that deliver good and thoughtful messages. But many don't feel like lyrical products of 2016 (take that as you will).

The bizarre choice of including "Christ The Lord Is Risen Today" on a June release notwithstanding (though, to be fair, it is definitely an interesting and rocking track), there is a lot to like about USS's self-titled debut. And while I'm sure there is a little bit of a publicity stunt in marketing themselves as something of a Petra/White Heart revival, it doesn't interfere at all with the quality or enjoyment of the music. Anyone who loves prominent guitars and good, pure, clean, classic rock will like The Union of Sinners and Saints, and I certainly wouldn't mind hearing more from these old guys in the future.