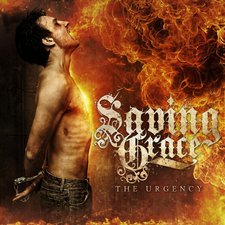 Spirit-filled metal connoisseurs Saving Grace may not be very well known here in the States, but in their homeland of New Zealand, they're huge, and for good reason. Their signature brand of metallic hardcore draws influence from metal's vast spectrum, both secular and Christian, and creates a punishing, yet uplifting atmosphere for many metalheads to indulge in. The band's last two albums, Unbreakable and The King Is Coming, were both above average as far as the over-saturated metalcore scene goes, but they still left a lot of room for growth. Well, grow they did, as the band's latest battle cry The Urgency is a completely different beast altogether when compared to their past work.

Saving Grace waste no time with long, drawn out intros this time around; album opener "+0" is a one-two punch of pummeling brutality, and it sets the mood perfectly for the entirety of The Urgency. Vicious riffs, blistering drums and head-bobbing grooves span the album's 13 tracks, and they are executed more masterfully than ever before. To be honest, they almost sound like a completely different band, in the best way possible. The momentum keeps going with the delightfully groovy "Like A Trainwreck," and the thrash-tastic "1994." Saving Grace are not afraid to wear their influences on their sleeves and fuse their hardcore background with their love of metal on this album. Some parts are clearly derived from the band's fascination with death metal, while others are straight Slayer-worship. It probably also helps that the band enlisted famed metal producer Zack Ohren to give the album that extra crunch, which he definitely succeeded at.

Saving Grace have obviously spent their time between albums honing their songwriting skills and technical chops, and it shows more than ever on The Urgency. Guitarists Vasely Sapunov and George White churn out riff after riff and manage to keep things interesting throughout the entire album. It's a true feat, especially for a metalcore album. Vocalist Nicolas Tautuh sounds as passionate and convicted as ever, and he doesn't shy away from heavy, challenging and personal subject matter with his lyrics. Their music may be vicious and sometimes downright ugly, but Saving Grace are dedicated followers of Christ who strive to reveal the Lord through their music, and they are not afraid to deal with the more difficult parts of life. Their music is all the more powerful because of this, and it is an admirable quality for them to portray.

If Saving Grace's goal with The Urgency was to create the heaviest album they possibly could, both sonically and thematically, they achieved this with flying colors, and then some. There are no soft interludes to be found anywhere on this beast. Not a single track goes over the four-minute mark; each song is more savage than the last. These qualities and more are what make The Urgency such a masterpiece. This album is, hands down, one of the best Facedown Records has ever released, and Saving Grace's peers may have a hard time topping what they've created in The Urgency.