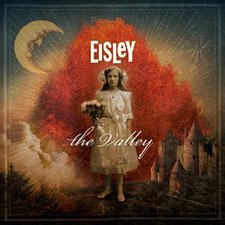 The years since Eisley's last full-length release, Combinations, could be best described as a long, hard road through the valley. Label troubles, a divorce, and a broken engagement have all affected the indie-rock quintet in the past four years, and in 2010 they parted ways with their label, leaving them with a completed album and no home for it. This could be enough to make any group cave under the pressure, but for this close-knit band, the bond of family and a love for making music were enough to transcend the problems and pain and come through stronger on the other side.

The DuPrees hinted at this shelved project by releasing two finished songs on The Fire Kite EP in 2009, and after four years of waiting to set their music free, the time has come to re-emerge with The Valley on Equal Vision Records. Built on impassioned lyrics, melodic indie-rock, and the whimsical signature harmonies they're best known for, this third project is a beautiful ode to heartbreak and hope that's well worth the wait.

With so much pain and frustration coloring the background story of The Valley, it wouldn't be surprising if their new work took a sadder turn, and lyrically, the darker sides of life and love are prominent. "Watch it Die" laments the death of love and the confused hurt of a broken relationship, while "Sad" warns, "you'll be left broken and bleeding / from the heart when he doesn't come home." Sometimes the lyrics can tend toward the adolescent; for example, the finger-pointing "Smarter" has some poetic verses, but the repetitious chorus "I'm smarter than you think!" starts sounding a little too angsty after a lot of listens. Still, The Valley puts all the raw, conflicting emotions on the surface and owns them without apology, an admirable trait that enhances Eisley's appeal.

For such dark subject matter, the music turns out to be surprisingly uplifting. These aren't bitter, weepy laments, nor do they wallow in anger and despair. They confront and acknowledge pain while pushing through, and the sound reflects a mature progression from their more fragile and innocent early style. The music weaves in more strings and piano, emphasizing some gritty, edgy rock flavors such as in the guitar-driven swagger of "Sad." Free from a major label deal that pushes for commercially viable music, The Valley is the sound of a band finally able to make the art they love, and it shows in the driving, confident music that supplements these songs.

There is hope in the valley too, as shown in the optimistic "Better Love." Rather than be knocked down by tragedy, instead they declare, "I've finally found out / You're on my side / With a bullet for the bad guys / Hallelujah." Lilting, almost playful melodies in the title track describe walking through the valley "'til everything is fine," and in one of the most stunning moments, "Ambulance," a song about singer Sherri DuPree's divorce written by Stacy, builds from a light piano melody to a pain-wracked crescendo that cries out "send me a redeemer / let me know if I'm gonna be alright." This was already a standout from The Fire Kite, but hearing it in context of the other tracks and knowing the love and empathy that went into creating it heightens the impact and makes it a powerful close to the album.

Rage, sadness, and hope infuse all of these tracks to create Eisley's most powerful, personal work to date, a phoenix from the ashes of the past that burns with passion and hope. The music is instantly catchy enough with memorable hooks, and has the indie feel without being pretentious. But the music's best reward comes from many listens and attention to the heart behind the lyrics. It takes some time for all the layers to unfold, but with infectious melodies to lead the way, this new chapter in Eisley's career could turn out to be a sleeper hit of the year.

Because of issues with their label, Eisley's third full-length project was delayed far past its original promised release date. However, after the wait, The Valley offers a look into troubled relationships with a backdrop of beautiful melodies and outstanding vocals. Of the three sisters in the band, Sherri and Stacy DuPree carry the album with their wonderful voices, but the fluid indie pop is delivered so effortlessly that it sounds equally wonderful. Highlights like "Better Love," "Mister Moon," and "Please" are haunting highlights that alone nearly cover the cost of admission. The other side of the album is the lyrics which are based, in most part, on Sherri's failed marriage. Her thoughts and emotions bleed through the themes vibrantly with a frustrated, and even angry, passion. Although some songs are more hopeful than others, there is a dark tone to the whole album which is never fully rescued by spiritually-fused messages. If The Valley tells us anything, it's that divorce is devastating and scarring. Perhaps it's only fitting that the singer cries out on "Ambulance," the album's final track, "I need an ambulance/I took the worst of the blow/send me a redeemer/let me know if I'm gonna be alright." - Nathaniel Schexnayder, 2/27/11