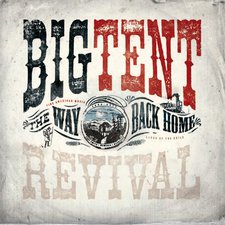 There is not nearly enough blue collar Christian Music, the kind of tunes that connect Bruce Springsteen and John Mellencamp so forcefully to their audiences. Thankfully, Big Tent Revival has returned after more than twelve years away with a batch of songs aimed squarely at the working man and the struggles of the everyday. "Hope For America" is an election year call for believers to repent and pray and, thankfully, eschews a simple political viewpoint. "Chevrolet Away" tells the comical tale of a young man in Texas who is just a certain car away from getting the girl of his dreams. Channeling a bit of Lyle Lovett's Texas twang and humor, tracks like this and "Dog House" (with the great lyric "wag your tail, scratch your fleas, move on over if you please, I'm sleeping in the dog house tonight") bring some needed fun to Christian music and show songwriter Steven Wiggins' talent for a catchy novelty song. Country star and guitar slinger (and Mr. Amy Grant) Vince Gill shows up on the soulful country-western waltz "Open Up Heaven," while "Under The Moon" is a sweet romantic tune celebrating married love that would not be out of place on a radio in Georgia. "Bigger Than Love" is a country weeper about a family's struggle to pay the bills and though they "don't know what the future holds, they know who holds it close." In lesser hands a tune like this could be seen as a cynical attempt at writing a maudlin tune, but Wiggins and company deliver it with heart and grace.

Funding the record through a Kickstarter campaign and bypassing a traditional record company yielded a mixed blessing for this album. On the one hand, Big Tent's cover of The Band's 60's hit "The Weight" (with verses from Third Day's Mac Powell and MercyMe's Bart Millard) is a wonderfully wacky pairing that never would be allowed if the "suits" were involved. On the other hand, the free reign to throw everything from the kitchen into the batter makes for an album that is not particularly focused at times and jumps genres like a flea on a dog.

But when Big Tent Revival gets away from the silly, they prove they can deliver a thoughtful meditation on the distance between earth and Heaven. "Gracefully" wields a lyric that is a bit deeper and more poetic than the country radio fare that precedes it on the album. Over what sounds like a resonator guitar, Wiggins sings, "How do we get to that other shore, the one none of us has seen before, except on the postcards and brochures, places like that do not exist, they told us when we were still innocents, to keep us from blooming into optimists and bringing this system down." The world weariness in Wiggins' voice on this tune suggests that he has seen much in his years removed from Big Tent's last show. There are few easy answers here but to "be taken to the riverside to die gracefully."

It will be interesting to see if this album connects with BTR's long term fan base. The music industry has changed immensely since their last album more than a dozen years ago, but it is good to hear the Big Tent Revival guys still testifying about God's goodness in their "every man" way.

Big Tent Revival is finally back after 13 years as Steve Wiggins has rallied the troops for at least one more go around with The Way Back Home. Big Tent has always had a southern influence in their music, but their newest venture takes them from influence to actuality. The best way to describe the majority of the group's fifth record would indeed be country. Perhaps some may call it roots rock, but it's country at the core. After adjusting to the new sound, the album becomes much more enjoyable. The lead single, "Hope for America," is a needed anthem given the current state of our union. "Lost Boy" is really the only rocker on this venture and is likely to be the favorite for fans looking for that older Big Tent sound. On top of a pile of country songs and a solid rocker is a cover of The Band's folk/rock hit "The Weight" and features some rather big named talent with Mac Powell and Bart Millard. "Bigger Than Love" is a storytelling song that may take one back to 1995 and "Two Sets of Jones'" which was written in a similar fashion. The album is half spiritual songs mixed with half love songs and fun songs. It's nice to see that Big Tent still knows how to have a little fun after all of these years. The Way Back Home is somewhat mixed overall and isn't likely to be known as the band's best, but it's real good to have them back regardless. - Michael Weaver, 10/26/12