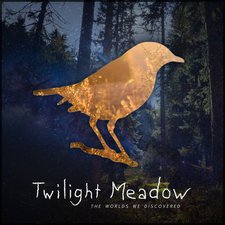 Twilight Meadow
The Worlds We Discovered


Matthew Parker has been making a name for himself as solo EDM/dubstep artist as well as a remix artist, appearing on albums by Rapture Ruckus, Shinebright, and Capital Kings. Wanting to explore other musical directions, namely his self-defined "dream electronic" sound, Matthew started a side project called Twilight Meadow. Instead of his typical heavy beats and epic drops, The Worlds We Discovered is soothing, dreamy, and delicately experimental.

It takes all of one second into opening track for the listener to draw comparisons to the swirling synthpop sounds of Owl City. However, it doesn't take much longer to distinguish the differences between the two: Matthew's vocals aren't as autotuned as what we are used to hearing from Adam Young and the music isn't as sugary. The dissimilarities work against him too though because his songs aren't as catchy or inventive as the synthpop veteran. The subtly spiritual and relational themes Matthew covers--both of which rely heavily on simplistic metaphors from nature--are pretty standard. It's clear though that the focus is not on delivering thought-provoking lyrical content, but rather to create an experience.

The lullaby "Sleep In Peace" is a great example of when Matthew captures such an experience, with the song's cheerful and gentle soundscape making you feel at happy and calm. Unique musical traits add character from track to tack such as the muffled beat boxing on "Mystery Mountain," the synthesized whistling on "Rise Sun Rise" and a keyboard that sounds like it came off the soundtrack for N64's Paper Mario on "Winter Froze The Flower." Guest vocalists also contribute to this distinction, however it's not always for the best. Anna Kris, who a soft, almost angelic voice, sings the majority of "Rise Sun Rise," but unfortunately the overused metaphor, an uninteresting vocal performance, and a long running time renders it a forgettable track.

"Mystery Mountain" concludes the album's regular tracks, and the remaining five tracks are all remixes. Jacob Stanifer's remix of "Galaxies Apart" boasts a smooth vibe for half the song before exploding with a big drop and Matthew's "Never Ever Ever" remix is also fun addition. Strangely, there are three remixed versions of "The Worlds We Discovered"--two of them from a remix contest and the final one from Matthew. These three remixes are fairly solid, so it's hard to complain about the redundancy of these bonus tracks.

Matthew's ambitious drive is very evident in this album. He certainly has the talent to make a masterpiece, and bringing on a strong producer like Aaron Sprinkle who would know where to trim the songs and challenge more depth in the songwriting would help him get there. For now, The Worlds We Discovered is an exciting start.