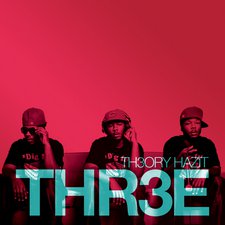 Theory Hazit is not a normal name you hear when discussing Christian hip-hop, but that should change after listening to his newest release, Thr3e. Hazit brings a sound similar to Common or Talib Kweli in the secular market, or label mate Braille in the Christian market.

While the title track is about the number three, and references several biblical threes, the entire album revolves around it. The album cover featured three pictures of Hazit and the letter "E" in every word, or the first in a word with more than one, is represented by 3. Thematically, the album tackles several sensitive issues from an absentee father to crack babies, and gets as deep as the prophecy of the seven trumpets.

The album kicks off with the upbeat title track, which is a precursor for what the remainder of the album has in store. Things quickly slow down with "Find M3" and is one of the songs to tell the story of Hazit's not so glowing past. The song features a familiar voice in the chorus as B. Reith has a guest spot on what is one of the album's best tracks.

The next track that really stands out is "I N3ed You Mor3 Than 3ver." The song is taken from the point of view of Hazit's young stepdaughter, sung to her birth father. The song talks about how much she needs her father and features a minute and a half long rant from Hazit to the father. Within that rant, Hazit proclaims his love for his daughter, his joy that she calls him daddy now, and refers to himself as a "...come off the bench dad. JV, second string, substitute step-dad." While the compassion and love he shows is moving, the seething comments such as, "One part of me hates you; other part of me is jealous. A small part if me thanks you; your negligence has given me a reason to breathe. I'm a step-father raising a worthless man's daughter..." are a bit concerning. Perhaps it's just an artist being brutally honest about his feelings and struggles with God and his listeners; either way it's hard to judge his intentions.

"Distort3d Joy" is the next standout track. The song starts with what seems to be a documentary on babies whose mothers abused drugs while pregnant. The opening words, "Look what lust has done to us," encompass the major theme of the song. Hazit uses a high-pitched voice, which actually sounds similar to the voice Eminem often uses, as he raps from the point of view of the baby. The song further discusses details of his conception (not vulgar details mind you) and his current health condition. This track is a real revelation for those who do not know much about drug abuse in pregnant women.

The final track that really caught my attention is "Doomsday Insuranc3." The song begins with a man reading Revelation 8:6-11a. Hazit picks up the scripture from there, rapping through chapter 9, verse 6. From there, Hazit warns that the rapture is coming soon and gives a reminder of the importance of telling your friends and loved ones of Christ, warning them "that they could be future Hell residents." While the song's speaker makes a very strong analogy, it's one worth taking note of when he proclaims, "We're denying our Creator. When we were giving the finger to Him, he gave His own Son and His own life for us." The song is powerful and should have you questioning your eternity if you have not been born again in Christ.

While not every song is perfect, there really aren't any bad eggs either. And while you will obviously like some songs more than others, there really isn't going to be any you will need, or want, to skip. If you are looking for big hooks and even bigger beats, Theory Hazit isn't what you want. If you are looking for solid hip-hop from a talented and honest individual, this is going to be right up your alley. It's early in the year, but I get the vibe that this will be one of the year's best in hip-hop. The best part is that the album is a free download through Humble Beast. Do yourself a favor, check this one out; head on over to their website, and support them and their artists.

Theory Hazit has been making beats and raps for a long time, with plenty of albums and beat tapes under his belt. He's rapped with (or done production for) Toni Shift, Braille, Wonder Brown and many more. For his first full-length record through Humble Beast, he's teamed up with legendary Tunnel Rats beatmaker Dert, and the result is Theory's long-awaited album Thr3e. The teamwork between Theory and Dert is excellent. Dert's production is of a more underground nature, with some nice boom-bap action, a little bit of R&B, some slight jazz leanings (like the saxophone behind Propaganda's guest appearance) and a good amount of soul (like the vocals in the hook of "Find M3"). Theory's flow is tight, with lyrics that are smart; he's confident in his ability to skillfully rap, but also stays humble, keeping true to the record label. In the album's intro, Theory talks about the number three and its different meanings and usages in today's culture. Later, in "Distort3d Joy," he speaks from the perspective of a fetus whose mother refuses to quit doing drugs while she's pregnant, and later discusses the consequences of such recklessness. Some of the lines are hard-hitting, like "Mommy, look what lust has done to us." Another emotional track is "I N3ed You Mor3 Than 3ver," where Theory addresses his need for his physical father in his life. Humble Beast cohort Propaganda arrives for the second half of the song and speaks to the father of his step-daughter with real talk ("Part of me hates you"), passion ("That's how much I love her, I am willing to admit that she does need you") and a little bit of pain in his heart ("I'm a come-off-the-bench dad, JV, second string, substitute, step-dad"). If you're looking for some good hip hop to start off the year, or you've been a follower of Theory Hazit, Dert or Humble Beast, you should definitely pick up Thr3e; whether it's free from humblebeast.com or a physical copy from Sphere of Hip Hop, you can't go wrong. - Review date: 1/18/12, written by Scott Fryberger of Jesusfreakhideout.com