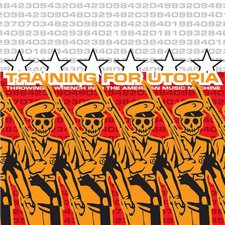 Training for Utopia
Throwing a Wrench Into the American Music Machine


What a thoroughly unconventional album! If I were to tell you that Ryan and Don Clark (of Demon Hunter fame) had released a hardcore album with disjointed flourishes of progressive rock (seen in the vocal effects, samples, techno noises, and looped beats) you probably still wouldn't be ready for the bizarre chaos that this project is. This is probably the weirdest hardcore/metalcore album I have ever listened to. And by weirdest, I am referring to every part of this album: the music style, lyrics, album title, album cover, and even the song titles.

The album opens with "50,000 Screaming TFU Fans Can't Be Wrong," which seems to be a song about wrestling with the rock and roll industry and rebelling against the unconventional. Much of this album reminds me of Showbread's "Sampsa Meets Kafka" in the minimal amount of lyrics, but, unlike the aforementioned song, having much longer or heavily repeated musical interludes. Despite this, there are some standout moments on the album. "Burt Reynolds v. Godzilla 1999" has some slow, calm musical repetitions and some clean vocals. "Everything Including the Stars is Falling (Baby)" is a completely random acoustic ballad that doesn't fit the album in any musical sense. "Dead Signal 2000" is heavily influenced by a repeated rap beat.

While this album is quite an interesting listen, and one that I would recommend to anyone who enjoys the unconventional, Throwing a Wrench Into the American Music Machine doesn't really come together that well. The lyrics are difficult to interpret, the music seems to have very little rhyme or reason to its arrangement, and the vocals seem to be a combination of autotune and sloppy recording. Regardless, the band seems quite aware of how ridiculous this album is and that vibe (along with my penchant for any weird music stylings) keeps me coming back to this record, and may have you enjoying it as well.