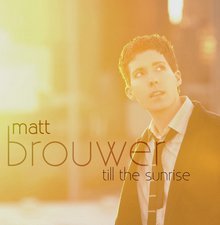 Matt Brouwer
Till The Sunrise

Back in the summer of 2001, it was nigh on impossible for the average listener to spin Matt Brouwer's curiously-titled debut album, Imagerical, and not feel an overwhelming sense of outright joy. Indeed, with its sparkling production, uplifting worship-oriented lyrics and shimmering dance-pop textures, the Nova Scotia native's freshman record seemed to put a certain lilt into the step of just about everyone who heard it. Of course, given the fact that it earned near-universal praise, sailed a pair of singles into the Christian pop Top 10, earned Brouwer a Juno Award (the Canadian equivalent of a Grammy) nomination for Best Gospel Album, and had many hailing the singer-songwriter as the year's best new artist, it seems likely that Brouwer, himself, was all but ecstatic with his present situation.

Critical acclaim and success at radio didn't translate into high sales figures, though, and, almost before the ink had dried on the liner notes, Brouwer began to view his meteoric rise to stardom as equal parts blessing and curse. The next pair of releases, 2005's Unlearning and 2009's Where's Our Revolution, were written during the ensuing season of disenchantment, introspection and uncertainty - the sum total of which was punctuated by the loss of Brouwer's father and sister. Not surprisingly, the praise-inclined lyrics and instrumental pep that lifted the inaugural project to its lofty perch were largely M.I.A. on the efforts which followed, replaced, for the most part, by somber, open-ended lyrical essays and correspondingly more subdued sonic backdrops.

At first listen, it would appear that Brouwer's latest offering, Till the Sunrise, is simply a continuation of the straight line traced out by its two most recent forebears. "Everlasting" and the equally pleasant title track echo the adult contemporary and easy listening textures found on Unlearning. "Wish You Were Here," on the other hand, mirrors the country-pop vibe of "The Other Side" from Revolution. At various other points, Brouwer ostensibly uses the pop and country textures of his last two outings as jumping off points for cuts like the dreamy, orchestrally-driven pop number, "One for Another," and the folk/rock/Americana fusion which forms the backbone of "Thornside."

For all of its musical similarities to Unlearning and Revolution, the new record finds Brouwer taking more than a few unexpected lyrical left turns. Inspired, no doubt, by his marriage to Hannah Ficker in 2010, "One in a Million" (Out of all the stars in the sky/ You're the only one that shines) offers convincing proof that finding a soul mate can, indeed, make all the difference in one's outlook. "Till the Sunrise" is similarly shot through with the relentless romantic optimism that springs forth from the hearts of those most deeply in love. Perhaps most importantly, though, the wording of spiritually-themed entries like "Everlasting" (You never let me go/ Your love has taken hold) and "Tonight" (You opened my eyes/ I can't wait to see the sunrise) provide welcome hints that the light of dawn may, at long last, be breaking on Brouwer's extended dark night of the soul.

Fans holding their breath for a return to Imagerical's worship-meets-Euro-pop stylings will have to wait at least one more album for that to happen. That said, although the better part of the new project lacks the buoyant, seemingly effortless, tunefulness and infectious immediacy that rendered the debut so enticing, it still has plenty to offer for those willing to listen closely. Indeed, these beautiful, exquisitely-crafted pieces tend to reveal their underlying treasures gradually, over time, rather than all at once. And even though the latest installment in Brouwer's catalog isn't stacked to the gills with sure-fire Top 20 pop hits like Imagerical, songs like "Ocean" and "One in a Million" are as strong as anything he's ever written and, along with the rest of the record, work together to make Till the Sunrise Brouwer's most consistent and impressive showing in over a decade.