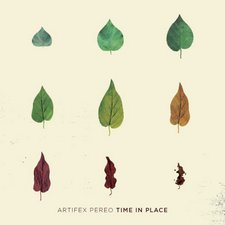 Tooth & Nail Records has been pretty active with signing new artists this past year. It's only May, and we've already seen debuts from New Empire and mainstream act Midnight Alive, and now we're being treated to the debut from what seems to be the most promising new signing, Artifex Pereo (pronounced AR-tih-feks pur-RAY-oh). The quintet's first major outing is called Time In Place, and it doesn't disappoint the anticipating fans.

The prime years of Tooth & Nail came, arguably, in the few years following the turn of the century, with high-quality releases from Anberlin, Emery, Project 86, Further Seems Forever, mewithoutYou, As Cities Burn, Showbread, Dead Poetic (need I go on?), and there is a lot about Time In Place that feels like it could have come out of that era. The album is slightly unpredictable as far as the genre, ranging from softer, piano-led tracks to solid alternative rock to relatively heavier sounds ("heavier" is a very relative term, though, as Dead Poetic and As Cities Burn easily "out-heavy" Artifex. There is a bit of screaming and near-metal instrumentation, though). This less extreme unpredictability is far from a complaint; rather, it is a welcome trait that I've come to miss in modern rock.

Artifex Pereo is consistent with its quality songwriting and musicianship. Listening to their music is like listening to a band that's been together for years and years; this becomes even more impressive when you consider that they only have two other entries in their discography, and that they've only been together for about five years. But they know what they want to accomplish with their music, and they go out and do it. And with that, we get songs like the explosive single "Hands of Penance" and the instrumentally-delectable "No Stranger To Worry." In addition to their aforementioned Tooth & Nail cousins, Artifex Pereo also seems to take a lot of cues from the band Coheed & Cambria (aside from the intricate story-telling).

The problem with Time In Place is that, after listening to the album multiple times, none of the songs really seem to stick out above the rest. The album is full of terrific songs, but they fail to be truly memorable in the long run. But that only goes so far to diminish the album's quality, which is still pretty high. Another downlfall is that some of the lyrics seem pretty bleak. "Hands of Penance," for instance, says "My life of moral decay was bound to damn me to this fate, held in the hands of penance, what good are dreams when I wake, to find I'm right where I'll always be even if I don't belong," and ends with "I'd see these walls in flames, I'd have to, I'd watch them crumble down to cleanse my win, a second chance to take a life back, but it will never come, a waste of time." "The Straight & The Winding Way" is a story about wolves hunting and killing a herd of sheep. Of course, this is nature, but this is clearly something deeper than a National Geographic documentary, and feels a little dark until the very last line, "How precious the seconds it takes to become found." It very well could be a parable for the world's existence, with the wolves being our flesh, sinful desires, or even evil spirits and the sheep being man as they carelessly graze away, but I can't help but feel slightly depressed about the lyrics. However, the last song, "Overview," does seem to end the album on somewhat of a higher note with lyrics like "Hanging there was everything that I knew, a brilliant blue flame, clasped between two weary palms attached to endless arms, carefully carried through all that dark." It's a welcome end to the partially depressing lyricism.

You know the saying "greater than the sum of its parts?" Time In Place as a whole is more equal to the sum of its parts. While Artifex Pereo comes out of the gate strongly (and stronger than Tooth & Nail's other young guns), Time In Place is a collection of good rock songs that are individually great, but aren't necessarily the components of a great rock record. It's well worth a listen, though, and even more worth a purchase. It's easily one of the best label debut records I've heard in a long time, but in reality, I think the best is yet to come for this group. If this is an indication of the direction Tooth & Nail is heading in the future, then Artifex Pereo might be leading us closer to more golden years of alternative music.

Experimental emo rock band? Shut up and take my money! Tooth and Nail's latest addition, known as Artifex Pereo, delivers that emo-filled melody-touched rock with hints of heaviness, certain to make some noise in this year's music scene. The album begins with "No Stranger to Worry," a solid track that not only showcases solid guitar and drumming skills, but has an ambient hard rock style infused with nice clean vocals and minimal screams, too. The next three tracks are all good in similar fashions, and "Liable For Tragedy" adds an emo-filled frenzy. Lyrics like "if you're anything like me, you're trying to catch up to fleeting frames, headlong into sand" and "it's just like us to wait until we're full of what we need to say" are screams to be sung along to. The soft side of Artifex Pereo is shown here and also in "Overview," both of which fit nicely on the fast-paced album. All of that being said, the problem that often occurs with an experimental sound is that sometimes the creativity just simply doesn't work out so well, and that can happen a few times on this listen. As with almost any album, there is a little "filler" here but I would certainly recommend fans of the emo rock scene to check these guys out. - Review date: 5/26/14, Kevin Hoskins

Time In Place is an album that will likely remind you of several different bands, but probably won't sound like any one band you've been listening to lately. Tooth and Nail doesn't have the strong roster they once had, but the addition of Artifex Pereo is a step in the right direction. This is definitely the type of band that T&N should be looking to sign and develop. Count this one as a big win. - 5/25/14, Michael Weaver of Jesusfreakhideout.com