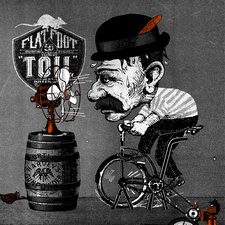 Nothing says "punk rock" quite like fast guitars, blazing mandolins, banjos, and, of course, bagpipes. Perhaps that isn't your typical set of punk rock rules, but Celtic punk rockers Flatfoot 56 live and die by them. Taking cues from bands such as Flogging Molly and Dropkick Murphys, these veterans are releasing their fourth album (as a signed band) of Irish folk infused punk music. Toil is aptly titled as it focuses heavily on some traditional Irish folk themes; namely the plight of the working man.

While Black Thorn was punk with some hardcore flare, Toil features a more straightforward punk approach with a lot more traditional Irish folk influence than ever before. Mandolin dominates the album and does so impressively. One might not associate the terms "mandolin" and "shred," but on several occasions it feels just that way. The album's opener, "Brother, Brother," starts things off on the right foot (pun intended). Lone bagpipes introduce the track for just a moment before the punk rock guitars kick in with a solid backing from the pipes. The lyrics state, "Brother, brother, can't you see? The path that you've chosen will lead you to misery," and can easily be viewed as a cry out to a lost family member or friend to turn to Christ from their destructive path. Next up is another solid bagpipe laden punk tune in "The Rich, the Strong, and the Poor." The song features a solid traditional punk rock hook and will undoubtedly have you singing along before it's even finished playing through the first time.

"I Believe It" brings the first big notion of traditional Irish folk. It's definitely punk rock, but the acoustic guitar opening and the constant mandolin bring on thoughts of Ireland. It's a positive song and one of the album's best. Moving ahead a bit to the title track will give you a real feel of the Irish folk sound. The song is completely acoustic and features a strong mandolin and string appearance. The lyrics focus on the working man and the difficulties associated with those who have no choice but to "toil" all day long just to make a living. "Live or Die Trying" is another exceptional tune and follows a more standard punk formula--well, as standard as you can get for a song filled with bagpipes. Though the record is very good until this point, "We Don't Work for Them" turns things up a notch. The punk song fueled by mandolin will likely be an album favorite by many.

"Strong Man" may be the best total mix of both styles of music. It feels punk rock, but at the same time seems to carry a strong sense of the Irish folk. The mash up of styles definitely makes for an entertaining listening experience. Flatfoot takes another break from the punk rock sound with "6'10"." It's folk music, but also has a bit of a country vibe as well with the acoustic guitar, harmonica, and banjo played throughout. Lyrically, it's one of the more entertaining tracks as the subject of the song proclaims, "I ain't gonna bother. I ain't gonna bother. I ain't gonna bother to tell you, son. You never listen. You never listen. I don't play ball just leave me alone." He explains the issues of his height and his aggravation with constant questioning (The lyrics never mention basketball, but it's fairly obvious that the 6'10" man, who doesn't "play ball," is talking about basketball).

From there the album ends strongly. The punk songs, "This Time" and "Winter in Chicago" (which features a nice piano riff), are as solid as they come on this album. The former focuses on a more serious subject matter while the latter is more of a fun and laid back romp. The most exciting part while initially looking over the track listing was the inclusion of "I'll Fly Away." As a person who loved "Amazing Grace" from Knuckles Up, it was thrilling to see another hymn included, especially with it being "I'll Fly Away." For this hymn, mandolin and bagpipes reign supreme; distorted guitars do kick in and push the song along, but the focus always remains with the traditional Irish instruments. For anyone who thought that hymns were boring, they have obviously not heard a Flatfoot 56 rendition. It's such a simple song, but the mandolin gets pretty extreme near the end. It is a stellar track and the perfect ending to the album.

Detractors? Well, there really aren't any. Perhaps the vocals don't sound as clean as they have in the past; they tend to come off slightly more raw and raspy. That issue is more of a matter of taste than anything else, though. If you are looking for spiritual relevance, there isn't much here. Most of the songs are about the working man, being under-appreciated, or are just fun stories. There is nothing wrong with having fun and these guys know how, but if you like a lot of spiritual substance in your music, this is probably not the album for you. There aren't any tracks that scream "Skip me!" and Flatfoot 56 have put together what is arguably their best work to date with Toil. Flatfoot seems to be a band that gets better with time as they continue doing just that. If you are a fan of punk rock or just plain old-fashioned good music, do your ears a favor and grab this one.

Life is work, and few understand this better than Flatfoot 56. The Celtic punk band from Chicago devotes multiple songs on their latest effort, Toil, to the labor that many Americans face every day. None of the songs written by the band mention God by name, but the album features many Biblical references. One downside is the few questionable uses of the word "hell." However, their terrific, mandolin-fueled cover of the shallow hymn "I'll Fly Away" strips away any doubts where the band is coming from. From a musical perspective, the album is more diverse, catchy, and all-around more memorable than their last album, Black Thorn. The fast-paced and hard-hitting "Brother Brother," "Take Hold Again" and "Terrorizing Truth" all anchor the release with strong punk rock tunes. Mixed in to change the album's pace is the haunting title track and the fun, atmospheric "6"10." The one main drawback is the vocals. Traditionally Tobin Bawinkel's voice is perfect, but there are times where I thought the enjoyment of the album would be increased if he would sing more with the tune (along with singing more clearly). Overall, Flatfoot 56 has offered an outstanding album, with only a couple of duds, that even trumps Black Thorn. - Nathaniel Schexnadyer, 7/23/12