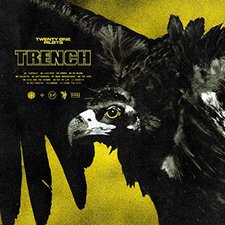 
In the three years since Columbus-based Twenty One Pilots (TØP) released their last studio LP, a lot has changed. The moderately well-known duo exploded into the mainstream with their genre-bending album, Blurryface, garnering half a dozen radio hit singles, in addition to becoming the first album in history to receive Gold RIAA certification for every single track. An achievement such as this is, well, quite difficult to tøp. Facing an uphill battle from the moment they achieved such unprecedented success, Twenty One Pilots has finally put its chips down on the table and released its fourth (fifth, if considering Regional at Best) album to date.

The result is about what can be reasonably expected. Fans who adore the band will likely hail Trench as TØP's magnum opus, and morose critics who detest the band's dark horse arrival will decry and exaggerate its flaws. The truth lies somewhere in between: Trench is an incredibly solid effort, but falls short of being a masterpiece. Delving into the album, it quickly becomes apparent that the band has grown and matured in certain capacities, but has also lost a few key pieces along the way. Lyrically speaking, the album puts past projects to shame when it comes to interconnectivity and building off the mythos of Blurryface and even Vessel.

To summarize, "Trench" is the name of a barren and uncharted world in which a city called Dema exists. Much of the record consists of frontman Tyler Joseph attempting to escape this city, which seems to represent mental imprisonment and the need to break free from brokenness and the hold of Blurryface.

Opening with "Jumpsuit," one of the album's first singles, Trench hits hard, framing a portion of the band's latest direction from the outset. The bass-heavy opener posits complex (and occasionally dark) lyrics: "I'll be right there / but you'll have to grab my throat and lift me in the air / if you need anyone I'll stop my plans / but you'll have to tie me down and then break both my hands." A harrowing feeling dawns as the closing lines ("jumpsuit, jumpsuit, cover me!") are screamed out by Joseph. The jumpsuit in question is likely symbolic of the Holy Spirit or the armor of God (Eph. 6), and seems to be the key to much of the internal conflict expressed throughout the remaining 13 tracks. It's also worth noting that the music video for "Jumpsuit" is one of (currently) three which offer more insight into the story of Trench.

The song flows smoothly into "Levitate," a short piece which showcases Joseph's flow, before heading into "Morph," where more Dema mythology is uncovered, and a new antagonist, Nico, is revealed. 'Nico' (or Nicholas Bourbaki) is a clever reference to the group of mathematicians responsible for creating the empty set symbol (Ø) (long a key element of the band) and attempting to prove the existence of God through numbers. The track itself adds a fun hint of R&B to the band's already impressive and versatile palate.

"My Blood" and "Chlorine" are quality offerings, serving to advance the story and bring more cohesion to the first half of Trench (more on that later). The lion reference in "My Blood" is interesting, considering the lyrics from "Migraine" back on Vessel. The deep voice on "Chlorine" brings Blurryface back into the fold ("So, where are you? It's been a little while"), though how he relates to Nico and the Niners remains to be seen.

"Smithereens" is a fun track, something which has been largely missing this time around. Its catchy melody and humorous meta lyrics leave a lasting mark: "For you, I'd go step to a dude much bigger than me / I would get messed up, weigh 153 / for you I would get beat to smithereens / you know I had to do one on the record for her / write a slick song just to show you the world / for you, I know they think it's messed up to sell out for your girl." "Neon Gravestones" is easily one of the album's best tracks, dealing with the topic of celebrity suicides and the value of life.

"The Hype" is another album highlight, functioning as a bit of a throwback to some of TØP's earlier works, and reintroduces the band's signature ukulele. "Nico and the Niners" deepens the album's story, bringing in direct references to the "nine bishops," or the rulers of Dema, likely representing different attributes of Blurryface, and therefore, struggles which Tyler Joseph faces. "Cut My Lip" fails to achieve memorability or originality, while "Bandito" shines as a variation of the band's typical style. Its lyrics are relevant to both the story and in a stand-alone format: "In the city, I feel my spirit is contained / like neon inside the glass they form my brain / but I recently discovered, it's a heatless fire / like nicknames they give themselves to uninspire."

"Pet Cheetah" is a fantastic and whimsical track, while "Legend" is a beautiful, upbeat piece (partial to the vibes of Vessel), written in relation to Joseph's grandfather who passed away earlier this year. "Leave the City" closes out Trench by expressing Joseph's resolve to leave the city of Dema, but also his failure to do so thus far.

Clocking in at just under an hour, Trench is by no means a passive listening project. The complexity of the Dema narrative is challenging to decipher, but truthfully, could also slide by unnoticed (or purposefully ignored) by most casual listeners. The lyrics are indeed brilliant, but generally only shine within the context of the album's veiled story and the band's past discography. Melodically, the duo has matured and grown in cohesion. While this is usually a desirable occurrence, Twenty One Pilots has always held a flare for the unpredictable. In bringing it all together, a soft monotony is formed, casting aside much of what made the band great in the first place. Strong melodies are largely absent until the last quarter of the album, and the over-reliance on hip-hop seems to undermine much of what Trench set out to accomplish.

Twenty One Pilots face down the frenzied expectations of fans new and old with their fifth release, Trench. Throbbing bass-lines, crisp production, and skillful drumming are on display to produce a cohesive and mature record. They accomplish this without losing the depth of lyricism and artistry for which the band has become known. Their schizophrenic pop isn't for everyone, but Trench is a clear step forward for this duo that continues to rise with no end in sight. This reviewer digs the rock moments of "Jumpsuit," the ear-worm "Chlorine," the eerie statement song "Neon Gravestones," and the quirky hard-hitting "Pet Cheetah." These are just a few of the excellent songs present, though others will likely rise to the surface with repeat listens. This album can be highly recommended on its musicality alone, though I very much look forward to examining the lyrics and seeing the bigger story unfold over time. Those looking for radio ready pop hits like "Stressed Out" and "Ride" may be disappointed, however, those willing to listen deeper will be rewarded with layers of meaning and nuance. Overall, this is a fantastic album from top to bottom, and should be a contender for all year end best-of lists. It's a must for fans! - Review date: 10/5/18, Josh Balogh of Jesusfreakhideout.com

Twenty One Pilots had me interested several years ago, before they made their label debut, but then Blurryface took my interest to the next level. Needless to say, I was beyond excited for Trench. Several listens in, Im not sure Trench stacks up against its predecessor, but tracks like Jumpsuit, My Blood, Chlorine, Neon Gravestones, and Nico and the Niners at least make it a worthy follow-up and a contender for my personal top ten of the year. - 10/13/18 Scott Fryberger