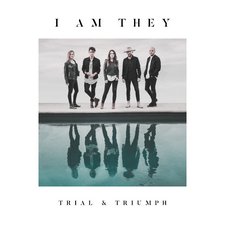 I Am They
Trial & Triumph


Nevada's I Am They burst onto the scene back in 2015 with a Mumford & Sons banjo-fueled worship song, "From The Day," that presented the band as a Western equivalent of Ireland's Rend Collective. The rest of their debut album didn't quite live up to that level, but the band's collective energy and verve drew a listening audience, and they received a Dove Award nomination for best new artist.

Their follow up album, Trial & Triumph, finds the band with a few new members, but a continuation of the country-pop / worship hybrid sound that they brought to the table last time around. Opening number "My Feet Are On The Rock" explodes with a down-home country music groove and instrumentation that recalls such radio staple groups (and mixed ensembles) as Little Big Town and Lady Antebellum. The sheer exuberance of the "woo woo" vocals and the take-charge attitude of new band member Abbie Parker are hard to not crack a smile at, and the band establishes a tone and energy level right out of the gate.

"To The One" features a soulful organ line to open the song, and the traded-off vocals between Parker and other band members keeps the energy level high. "How Far We've Come" gallops along on a neat country beat and celebrates the distance a believer has come. This is an important idea, looking back in awe and appreciation for the things that the Lord has done in our past, and the band handles the theme well, "Every step, every struggle / Every triumph, every trial / Look at the mountains we've climbed / Look at how faithful He's been / To deliver us / Look at how far we've come / The story of unfailing love / Jesus has made a way /To deliver us / Look at how far we've come."

"Scars" and "No Impossible With You" tread familiar ground within the CCM world, but are well-written and honestly performed. But it's the next track, "The Water (Meant For Me)" where the band shines the brightest. With a similar feel to Hillsong United's "Oceans" (in both musical and thematic ways), "The Water" is a slow-building powerhouse of a tune that should find an audience easily. "Near To Me," "Crown Him," "Still Here" and "Let Your Love Pour Out" all unfortunately all share a similar tempo and feel, and end the album in a forgettable fashion. The energy and buoyancy of the first few songs on the album is all but dissipated by the end of the album's ten-song run. The album would have been served well with one more upbeat song to bring things home and break up the slow pace at the end.

There is room and great potential in the CCM world for a country-pop worship band like I Am They, and depending on your views and/or tolerance of modern country music, you will either find a lot to like with Trial & Triumph, or want to skip it for something else in the worship genre. But there is much to admire in the professionalism and sheer heart of the band and their devotion to worshiping the Lord through everything that life has to throw at us.