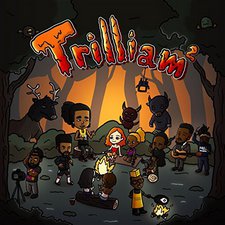 
Aha Gazelle impressed me in 2015 with his independent release, Free Barabbas (#7 on my staff Top 10 list), on Rapzilla. Since that time, Aha has singed to CCH giants, Reach Records. When Aha signed to Reach, I was excited, thinking the label needed a fresh injection with a rapper possessing a different style from their regular roster. While Free Barabbas made a strong impact two years ago, his latest mixtape, Trilliam 2, doesn't have the same effect.

"The Price is Always Right" starts the EP off as one of the better songs on the mixtape. While some could take this track as Aha bragging on himself for making money, or being able to charge more, it's actually a reference to an early song titled "King David," and meant to be a creative look at a song about money. "Twentylemhunnidmillion" is a fake number that Aha made up in the studio that references the amount of times he's failed and came up short in his life -- it's also the figure that he believes he's worth. The track is one of the better songs on the album, but the repeated "twentylemhunnidmillion" grunted through the entire runtime really wears on you. For my money, "Momma House" -- featuring MC Fiji -- is the best on Trilliam 2. In what could be a first in rap music, Aha is bragging about living with his mom. Fiji (a bit of a cross between Mystikal and Little John, vocally) jumps in for his guest spot, and as Aha himself says, takes it to another level. However, after Fiji, Aha has the best set of bars in the entire mixtape, including: "And now they call us satanic because they can't understand it. They wanna know how we manage; they more confused than a tranny..." The whole verse is killer, though not necessarily for the faint of heart.

After the first 3 tracks, the mixtape shifts a bit stylistically. While the first three were more along the lines of what I expected from Aha, "Keep It in the Family" borders a little bit on the mumble side of rap. "All Gold Party" (a continuation of "All White Party" from Trilliam) is the first of two songs where Aha, oddly, raps about macaroni. "Another Sauce Song" (a continuation of "Sauceallonmeh" -- his least favorite song) is the second song where Aha is rapping about macaroni, as well as other pastas like ravioli. "Vegeta" closes the mixtape out with one of Aha's most popular songs. The song, named after an anime character from Dragon Ball, is a reminder from Aha for fans to not put him up on a pedestal as he will certainly let them down.

It's doubtful that Trilliam 2 will end up on any list of classic rap albums/mixtapes, but there are still some strong tracks to be found here. The opening three, coupled with the closer, give the listener a lot to enjoy. While some will undoubtedly love songs from the middle of the mixtape, they just don't share the same punch, or lyrical power, as Aha's previous work -- two songs featuring macaroni raps is honestly too many for any album. I would, however, highly recommend checking out "Momma House," as well as the accompanying video. Also, if you'd like a little extra insight into each track, Aha offers up some commentary on the mixtape available on Spotify. If you haven't heard of Aha Gazelle just yet, Trilliam 2 might not be the best introduction, but hopefully he can bring some much needed diversity of sound to the Reach Records family.

Newly signed Reach artist Aha Gazelle is dropping his first Reach album, Trilliam 2, as a follow up of sorts to Trilliam, which dropped about a year ago. The Louisiana native is bringing a style to Reach that the current lineup doesn't feature very often. This short release (seven songs and a skit) really showcases who Aha Gazelle is. Opening this album is "The Price Is Always Right," where Aha spits with a serious flow over hot beats that can be appreciated by rap heads anywhere. Soon, "Momma House" comes along and is easily my favorite track on Trilliam 2. Aha teams up with MC Fiji in a seriously head-noddin' track that features ferocious rhyming, boasting about living with your mom. It's hard not to love that. "Keep It In The Family" is a meaningful tribute as Aha opens his heart in gratitude to those who contributed to his upbringing in this touching song. After that, most of the remaining tracks leave much to be desired and I wish there was more to enjoy on this release. Don't get me wrong; nothing is bad here, but there is nothing that is really amazing here either (and I just couldn't enjoy all of the pasta references in "Another Sauce Song"). Trilliam 2 does have some unique touches, though I could imagine some listeners drawing comparisons easily. Overall, this is one of those albums that I can see people playing all summer long and, at the same time, I can see people hearing it once and passing over it completely.
- 6/12/17, Kevin Hoskins of Jesusfreakhideout.com