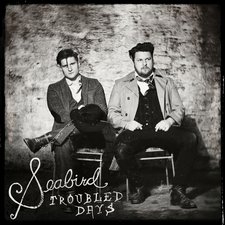 For previously signed artists, Kickstarter sure feels like the way of the future. Despite the various gripes associated with the crowd-sourcing method, it continues to resurrect the careers of many an independent artist, and Seabird is among the latest to join the ranks of this list. Almost four years after Rocks Into Rivers, their sophomore effort on EMI CMG's indie imprint Credential Recordings, fans willingly funded what became Troubled Days, a skillful rendition of longing for better times.

If this record's title didn't indicate this fact clearly enough, Troubled Days isn't a terribly chipper album. As an ode to struggling with relationships gone awry, the record maintains one constant theme that delivers a polished emotional tug for the listener; Aaron Morgan's elevated vocals keep the focus on searching for peace in the midst of frustrating love, and it's a genuine yearning. Though Seabird hammers this train of thought to the ground by the record's end, it accurately reflects the nagging unanswerable questions that plague an aching heart, doing well to keep the listener engaged with this mindset. Fluctuating safely between firmly resolute ("We Can't Be Friends," "Troubled Days") and anticipative of a brighter future ("Love Will Be Enough," "Find a Way," "Golden Skies"), there's a healthy range on the emotional swing, and it rescues the record from ending up in a wasteland of "break-up albums." With a relatable theme in tow, Troubled Days majors on tangible emotions, providing room for the extreme on occasion (even punctuating the title track with a brutal and decisive "to hell with these troubled days"). The feeling is always real, even if it's rarely jovial.

Still, optimism is never completely abandoned, as Morgan recurrently strains to find solutions. "Pull You In" deliberates on "what if" scenarios and reflects on the happy past to come to terms with a lost love, while "Please Please Please" and "Find a Way" are calls for change in relationship dynamics before the demise occurs. "Golden Skies" seeks to encourage a dispirited friend with better times to come, while "Love Suicide" take a similar path pointing to the deficiencies of a destructive lifestyle while pointing to the ultimate source of comfort ("there's a hand above you to pull you out alive"). The singalong-able "Stand Out" strays a bit from the theme, however, wrestling with self-righteousness and tiring with doing what is good ("I'm just an old blind man when my eyes are on me/sweet Jesus, please help me to see.../wake up oh sleeper, it's time to do your best/it's time to stand out from the rest"). "Palmetto Beach" ends the album with a piano solo, finding Morgan seeking counsel as a young man who "feels so old."

On the band's Kickstarter campaign page, Seabird went on the record with saying, "we're not looking to reinvent ourselves, only to improve on what we've done by continuing to hone our craft, write fun, inspiring, honest songs and never take ourselves too seriously." Based on this description, Seabird has achieved their goals wonderfully. When stacking up Seabird's body of work, it's fair to say that Troubled Days isn't a huge change from their past precedent, and upon initial listens, it somewhat feels like a stunted growth since Rocks to Rivers four years ago. Repeat listens tend to alleviate these types of issues, however, and in the long run, the indie rock sensibilities are accomplished as ever. Morgan's vocals remain a prime distinctive of Seabird's concept, and the guitars and pianos play off each other effectively through the record. If anything, Seabird's approach feels solidified and refreshingly candid, and the band clearly knows what they want to be and how to illustrate it.

An album that treads these emotional waters could serve to merely affirm pain without pointing to what's truly important; thankfully, Troubled Days rises above this potential tendency, grappling with uncontrollable evil without giving into hopelessness. At the same time, the album thrives on lush sentiment and proficient musicianship, both of which are marks of an independent band operating at their highest gear. Troubled Days is perhaps Seabird's richest and most fulfilling album to date, and it's a becoming return for a sorely missed band.

Add Seabird to your list of newly independent bands, then add them to your list of bands who have created successful Kickstarter projects. After a few years as one of the darlings of the Christian indie rock scene, Seabird has fallen off the radar a bit, but their actual musical product has only improved with their newfound independence. Troubled Days is honest, raw, musically impressive, and it never panders to the radio. This collection of lovely piano rock tracks often reminded me of early Keane material, which can only be a good thing. The upbeat energy tracks like "Love Will Be Enough" are plenty of fun, but this album really shines in the slower moments like "Something Better Change" and "Palmetto Peach." And to top it off, there's a little dash of folk in "Stand Out." Troubled Days is simply a great album, and the future of Seabird as an independent act looks bright. - Timothy Estabrooks, 7/16/13