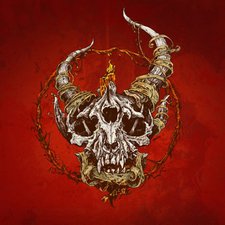 There's something strangely comforting about the presence of Demon Hunter in the world of today's metal. With bands emerging and then disappearing seemingly day-by-day, Demon Hunter has been a constant over the last 12 years and 6 LP's. While their sound has changed some over the years, they have remained generally consistent throughout their career. With this consistency, of course, comes a familiarity that can often lead to staleness. Thankfully, this is not the case with the band's sixth full-length release, True Defiance.

Frontman Ryan Clark is on the record describing True Defiance as Demon Hunter's "most aggressive" album to date. This is true in a sense, but the aggression is more evident in the lyrics than it is in the music. While the album is no doubt heavy, it doesn't have the same frantic energy that the band's last album, The World Is a Thorn, had in tracks like "This is the Line" and "Tie This Around Your Neck." What True Defiance does have, however, is a stylistic consistency not found on their previous release. The World Is a Thorn was in general more experimental, and the end result was a mix of the excellent (the European death metal influences on "Just Breathe"), the unfortunate (the groan-worthy "LifeWar"), and the thematically bizarre ("Blood in the Tears"). True Defiance avoids this mixed bag by sticking to the band's tried and true straight-ahead metal approach of harsh vocal verses mixed with soaring, melodic choruses. This approach is strengthened by a solid showing on guitar from lead guitarist Patrick Judge and new second guitarist Jeremiah Scott (also of The Showdown). Judge contributes mightily in the form of several excellent solos, an element lacking from most of the band's previous albums. Meanwhile, the occasional metalcore influence rears its head, with some A Plea For Purging-esque riffs and at least one breakdown. Nevertheless, the end result is something simpler than what we've heard since possibly the band's first two albums.

That being said, the element that has been most improved upon on True Defiance is the melodic choruses scattered throughout the album. Demon Hunter's melodies have always been powerful, but they took somewhat of a back seat in The World Is a Thorn. Here they've returned with more force than ever before. The choruses on tracks like "God Forsaken" and "My Destiny" are passionate and even beautiful in a decidedly metal way. The album's two ballads, essentially a guarantee on a Demon Hunter release now, are also intensely melodic. The highlight of the two is definitely the haunting tune of "Dead Flowers," although "Tomorrow Never Comes" is excellent as well. There are also a couple of heavier tracks that are still primarily clean, hearkening back to songs like "One Thousand Apologies" from The Triptych. Clark is in typically full voice throughout the album, reaching into some deep lows only to stretch and hit the occasional soaring high note. Also of note is the closing track, "I Am a Stone." Here we find Clark singing to an accompaniment of only violins. It's the riskiest track on the album, but it thankfully avoids being cheesy.

As mentioned before, the album's real aggression lies in the lyrical content. Demon Hunter has seemingly always been angry about something, and this is no exception. True Defiance focuses primarily on maintaining a Godly life in a culture that is becoming progressively more godless. The tension between a Christian and the culture around him is addressed in tracks like "Someone to Hate." "We Don't Care" serves as an indictment against apathy, saying that as Christians we primarily don't care enough to act even as the world around us is condemned because of sin. Such heavy themes are the typical fare for this band, but that hardly makes them less worthy of consideration.

True Defiance is in many ways the album you would expect from a veteran band. It's not highly experimental or cutting edge, rather it is a well-polished, thoughtful tribute to the genre that Demon Hunter has thrived in all these years. Instead of messing with the formula, they have fine-tuned their familiar sound to a point of near perfection. While this reviewer would be hard pressed to identify Demon Hunter's greatest album, there's no question that True Defiance is in the running.

When I started to think about the new Demon Hunter album, I reflected on their past offerings and quickly realized that they are one of the few bands who consistently put out stellar metal every time. All killer, no filler. Front man Ryan Clark even said "It seems like most bands' prime years are long behind them. I refuse to let that be the case for us." DH has done it once again with True Defiance, doing what they do best: blending hardcore with melodies and the occasional soft touch - basically making metal perfection.

Album opener "Crucifix" is exactly what we all hope for when catching some Demon Hunter. You'll find the double bass, power chords, and a blunt message about the vile parts of this world. You're also going to notice the extremely fast metal guitar riffs which are much more prevalent here than on any prior DH release, and this addition is wonderful. The next few tracks are standard DH fare with each song coming out solid. "Tomorrow Never Comes" and "Dead Flowers" offer the softer ballad type where fans can raise their lighters to take a break from the heavy. "Someone to Hate" and "We Don't Care" are in your face messages thrown to listeners with the words "This is total war, my want for tolerance is dead," driving home the God-focused message the boys from Seattle always have at the forefront.

All in all, this is exactly what fans will expect and want from Demon Hunter. True Defiance is easily one of the best albums to be released this year. - Kevin Hoskins, 4/10/12