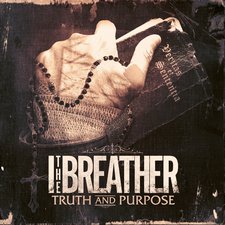 I The Breather
Truth and Purpose

A heavy and passionate quintet of Baltimore, Maryland known as I The Breather first came about with their very impressive debut, These Are My Sins, and have followed with Truth and Purpose. The one question most people where wondering after their debut was, "Can they separate themselves from the rest of the pack?". With this release, they do that, and more.

Kicking the album off is "False Profit", which is by far a highlight of the album and its longest song, clocking in at 4 minutes and 35 seconds. While the guitars have often been compared to August Burns Red, they have their own sound on this album. It may not be shredding 24/7, but it fits the song perfectly. Frontman Shawn Spann has a raw passion in his screams that is hard to find these days. Then, we have the track "The Beginning," which is interesting because we get our first listen at clean vocals from the band, which are a pleasant suprise and change.

Now, I want to focus on the song "The Mentalist," which has a nice groove to it and is very infectious to the ears. As a cherry on top, the song features Micah Kinard of Oh, Sleeper, who has a unique scream and it makes this song a highlight. Halfway through the album, we find ourselves with the first instrumental from this band, called "Lunar." Frankly, it's not musically "pushing boundaries" or "earth shattering" but it is very relaxing yet heavy--which is a bit of a contradiction, I know. Then, we come to "Judgement" a couple of songs later, which features a piano intro into a catchy guitar section. The closer, "4.12.11," starts off with a very chill guitar and then goes full throttle with Spann's screams leading the way. Now, I haven't said much about the drumming on the album; I saved that for last. One person who keeps getting mentioned in various reviews and that is considered one of the most underrated drummers in metal, is Morgan Wright; I couldn't agree more. This guy is just talented. He's definitely a backbone in this band. And not just throughout this whole album, but in every song I The Breather have done, he's performed flawlessly. So, needless to say, he has my utmost respect.

Lyrically, the band touches on subjects of people trying to be God ("False Profit"), being persecuted for our faith/beliefs ("Mentalist") and trying to survive in your faith while being neglected as a child ("The Beginning"). My favorite lyrics, though, would have to be from the closer, "4.12.11", which is about trying to follow the Bible and still believe in our Creator while losing someone very close to you. That's not a common subject to write about.

The only negative of the album really, would be the time clocking in just under 35 minutes, but you know it's a great album when that's the only negative thing. These guys are going down the right path. I The Breather's potential is through the roof. Don't overlook them or you will be missing out.