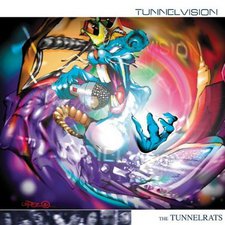 
The current underground CHH market is saturated with great artists such as Second Chaynce, Move Merchants, Applejaxx, John Corbin, J. Skywalker, and The King's Offspring. However, in the mid-90s and early 2000s, there was one crew that dominated this niche.

Before Reach Records and the 116 Clique, there were The Cross Movement and Deepspace5. Before The Cross Movement and Deepspace5, there was the Tunnel Rats. This underground hip-hop battle rap group consisted of many diverse members, both male and female, as well as white, black, and hispanic. Some of their more famous members are Propaganda and Sev Statik. They paved the way for battle rappers like Loso, Street Hymns, B-Doe, and Th3 Saga. In 2001, they dropped an album that, in my opinion, is the poster record for underground Christian hip-hop: Tunnel Vision.

The opening track, titled "A Long Road," performed by Macho (of New Breed), re-introduces us to who they are, and what they have been up to since their previous album. Dert produced all of the tracks on this record, and it's evident that he knows what he's doing. The beat is intense, and it instantly captures your attention. (He wasn't lying in the intro when he said "Dert perfecting the breaks.") This track, and the rest of the album, is riddled with clever lyrics, profundity, and a delivery reminiscent of battle rap. The main theme they want you to focus on is wisdom. Macho spits, "knowledge without wisdom'll be a fatal regret," and later says "thank God for all the wise fathers that schooled me" and "still much to learn."

The next track wastes no time introducing us to the entire crew. "T.R.'z" features every member of Tunnel Rats. Some might have issue with this track because it comes off as very braggadocio, but the overarching message of this track is that they've been given their skills from God. This is an album, and even a Tunnel Rat, staple because everyone's skills shine on this track. It has the all the aggression and energy of battle rap.

Something that keeps the album interesting is the different combination of rappers they have on each track. Not counting the few tracks Macho does by himself, or the two solo Raphi tracks, none of the other tracks have the same lineup. Every track on this album offers some sort of insight or wisdom, tackling topics such as offering your two cents to people when you've never been in their situation, spiritual warfare, and how every human is in the race to the finish of this thing we call "life."

A track I want to highlight is "Ladies." "Ladies" gives room for Elsie and Zane to speak their minds about issues they face as women, but it's also a canvas for them to speak a message to other women that men may not be able to. Before Cataphant's #CHHsexism, and before Thi'sl's "Gurl Code," there was "Ladies."

Some negatives include the interludes. There aren't too many of them, but I've never been a fan of interludes, and they don't add much to the album. Other complaints people might have is the length of the album. At over an hour, and at 22 tracks, if you're not a fan of underground boom-bap hip-hop, this album might feel like a drag. The beats are married to the lyrics on each track really well, but they're not club-friendly. If you're looking for turn-up music, this is NOT the album for you. Additionally, people in the past (i.e. Cross Movement) have complained that this album doesn't have the Gospel much in it. I have to disagree with this. The Tunnel Rats don't make lyrical theology, this is true. However, the gospel is interwoven into each track, and a listen will make that evident.

If you're a fan of underground hip-hop, battle rap, or boom-bap, then Tunnel Rats' Tunnel Vision is a must-have.