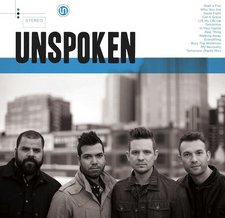 Many a rock historian has put forth the theory that the best, most compelling music is born out of the hardest, most desperate times. While this hypothesis may not be universally true, one would have a hard time arguing against it in the case of the self-titled full-length debut from the Nashville-based quintet, Unspoken. Made during a time when all five of its members were living below the poverty line, the album is a musical tour de force, shot through with an enthusiasm and verve that belie its creators' dire financial status and elevate it far above the average safe, run-of-the-mill efforts that virtually dominate the upper reaches of the current-day inspirational pop charts.

The sprightly leadoff cut, "Start a Fire," is a perfect case in point; its snappy contemporary pop/soul-inclined grooves daring even the staunchest of doubters not to stand up and dance along. "Good Fight" is a likewise breezy slice of blue-eyed soul that artists like Maroon 5 would have given their eye teeth to have written. "Tomorrow" is the bright, barreling sound of U2 covering Rascal Flatts (or vice versa). And "Call It Grace" is the sort of ballad that virtually guarantees an arena full of cell phones held aloft, swaying in unison to its slow, steady grooves when played in the concert setting.

The latter half-dozen tracks, while not quite as cohesive, feature a sort of sprawling diversity that still renders them every bit as impressive. The appropriately understated "In Your Hands" sounds a bit like The Beatles' "In My Life" on the verses and Garth Brooks rendition of "To Make You Feel My Love" on the chorus. The crunching "Everything," by comparison, shows just how crucial a solid, swaggering melody line is to any song that would deign to call itself true rock 'n roll. "Bury the Workman" tosses in what is arguably the most surprising left turn of all, thanks to its bluesy, classic spiritual vibe. And the stark, piano-based ballad, "My Recovery" proves that, regardless of whatever external sonic window dressing (or lack thereof) is applied, the members of the Unspoken collective know what it takes to write a great song.

The fact that so many of the record's lyrics roll so smoothly off the tongue may tempt listeners to mislabel them as either offhand or lightweight. As it turns out, nothing could be further from the truth. To be sure, one can almost feel the crushing sense of letdown that accompanies the opening lines of "Walking Away." ("Everything I ever wanted / It was there within my reach / I spent all I had to get it / And found it wasn't what I need"). "Call It Grace," by comparison ("It's the light that pierces through you/ It knows your deepest secrets / But it never looks away"), puts forth one of the clearest, most heartening encapsulations of unmerited favor in recent memory. And the unwavering declaration of hope at one's lowest point found on "My Recovery" should spur many a despondent soul to reach out to God for healing and restoration.

Needless to say, this eponymous offering cuts a massively large swath, carrying with it the sound of a band confident in their own identity, dead set on forging a sound of their own and succeeding marvelously. If it had hit the shelves during the age of vinyl, the first six tracks would have been the hits side and the back half of the album would probably have been labeled the experimental side. As it stands, though, here in the digital age, the two portions on either side of the imaginary dividing line fit together in absolutely complementary fashion to create a final product that may well wind up being one of the more unique, diverse and engaging releases of 2014.