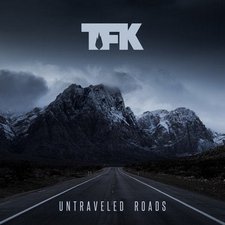 
There are not enough genuine live rock and roll albums in Christian music. There are many patched-together samplings of live concerts, or the occasional live EP that runs just a few tracks. But the actual recorded document of a single night's work, with all the stage banter (both the epic and the filler) and wrong notes in place, is hard to come by. Needtobreathe put out a stellar one a few years back, and now veteran hard rockers Thousand Foot Krutch have given us a very good, one-hour Winter Jam set that both rocks hard and makes the listener feel as if they might be right in front of the stage (assuming you turn it up loud enough).

Frontman Trevor McNeven certainly knows his role as a hype man, and his crowd interactions and energy are a vital part of the band's live show. His immediate burst of momentum in set opener "Running With Giants" sets the tone for a manic, yet never out of control, set. Fan favorite "Light Up The Sky," with its hypnotic, Rage Against The Machine-style guitar riff and clever spin on the historical phrase "never before have I seen such lions led by such lambs" (the context of that phrase is worth looking up), follows and ups the energy considerably.

The album's title track, a head-banging challenge for believers to live differently than the culture around them, is a great moment of both encouragement and sonic heft. Other highlights are set closers "The End Is Where We Begin" and the guitar wailing "Different Kind Of Dynamite." McNeven's challenge to the crowd before "Be Somebody" to embrace who the Lord has designed them to be is also a heartfelt devotional moment, and a nice inclusion. (Many times small moments like this between songs get edited out of live albums for replayability reasons and to trim the runtime back.)

Live albums can be graded on a number of different criteria. The first one is "does this album show a new side to these songs?" On this point, the answer is "yes." There is a bit more of a sonic punch to these tracks, and a few are drawn out just a bit longer, giving them more presence than the album versions. The second is "does this album accurately recreate the feeling of being in the audience?" To that point, the answer would also be "yes." This particular night involved a tight schedule (Winter Jam has many bands playing on the same night in a tightly choreographed setting), but TFK's set was blistering and quality nonetheless. The third grading point would be "are there any surprises here?" (cover songs, guest duets, etc.) To that point, no there is not. However, the Winter Jam model is most likely the reason for that.

This is the band's second quality live album (after 2011's Live At The Masquerade), and it's a solid blueprint for how a band can both create a wild and uplifting night for fans new and old, and document a very good show in the process.