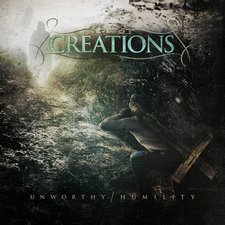 Creations is a Christian band signed to the secular indie metal label Mediaskare. While the label may be fairly new to Christian metal, they had a pretty good idea of what they were doing when they signed this Australian outfit. Upon first listen to Creations' second album, Unworthy/Humility, isn't really anything special, but with subsequent listens, that begins to change. The simplest way to describe the music is heavy--just plain heavy. They are actually one of the heavier bands to be introduced to the Christian metal scene lately. Guttural vocals dominate much of the album, but they are often offset by more high-pitched type screams. Adding to the fun is the hardcore influence thrown in from time to time. "Chasing the Wind (Vanity)" is a great example of this. The track starts out as a normal heavy song, but then around the one-minute, 10-second mark, the hardcore influence shines through. It may seem a bit strange at the beginning, but when they do it, it actually blends quite nicely.

The opener, "Depths of Me (Unworthy)" opens things on a positive note. The haunting guitar lead played over the heavy music sounds great and adds a lot of depth musically. You will actually find this type of depth in several songs, including "Home is What I Left (Betrayer)," "Paid in Full (My Neglect)," and "Newborn Race (The Untamed)." While most bands in the genre are more than happy to just chug their way through every song, Creations attempts to add something interesting to contrast the constant barrage of heavy music they send your way. Creations also give you some nice lyrical tidbits to ponder as well. In "Home is What I Left (Betrayer)," singer/growler/screamer Thomas Hirst takes an honest, yet somewhat darker, look at himself as he claims, "I am the betrayer," and later, "I have taken the focus off of God. Bring it back, bring it back to him!" "Paid in Full (My Neglect)" keeps the darker tones going and observes, "So I look back and it's more than a beating He took for me. I will suffer; we will all suffer! My sin condemns me and Jesus died to set me free." The record is full of spiritual content lyrically; much of it takes a darker look at things and thankfully it doesn't really come across as cheesy or cliché.

The musicianship is also top-notch and sounds excellent. The band tries to diversify as much as possible and, although you may not hear much change from song to song on your first listen, you will likely notice something new and different with each listen thereafter. Most of the music has several layers and is much deeper than you might think. The guitars have a nice heavy tone, the drums sound amazing -- especially the cymbals (they sound so flat in too many metal albums) -- and the vocals are perfect for the sound. While nine of this ten-track outing's songs are a brutal metal bombardment, they do, however, take time to slow it down for "Interlude (Desperation)." The track begins nicely coming off the "a cappella" screams that end "Eyes, A Gateway (Our Abyss)". The music features three simple guitar chords played over some melancholy sounding swells. It's a short, one-minute long, track, but is a nice change of pace before heading back to the metal beat-down of "None of Me (Humility)".

There aren't any stinkers on Creations' second full-length record. The music is as solid and diverse as you will find in today's metal scene. You have to listen beyond the chugging to find the diversity, but I assure you it's there. Also, you won't get beaten to death with breakdowns, which is also a plus. The musicians in the band are more than capable of playing their instruments it's easily heard. On top of that, the vocals are spot on for their sound. The biggest, and only real, complaint I can muster, is that there are only nine tracks of metal goodness to enjoy. It would have been nice to see a couple of more songs on an album that tops out at only 33 minutes in length. What I thought would be another ho-hum metal album turned out to be what's possibly the best sounding metal album, at least to hit my ears, this year. Pick up Unwothy/Humility today and see if you find yourself playing this gem over and over; it gets a little better each time.

I would have said that deathcore and Christian lyrics would never merge, but considering the subject matter around the crucifixion, it may in fact be very appropriate. Mediaskare's Creations delivers exactly this unorthodox combination in their new album Unworthy/Humility. "I am the murderer on Damascus way. I am the sinner saved by grace," chilling words when bejewelled by overlaying whispers and brutally low guitar chords. Indeed, despite being on a secular label, Creations have written more open and honest lyrics of faith than most Christian bands. "What am I when compared to the beauty of your humility?" Adversely, they have put together one of the nastiest and heaviest albums Mediaskare has ever produced. In the pure mechanics, there really isn't much to their music. Between the incessant chugging and breakdowns, the guitars seem rather discordant and often too much gets crammed into the tempo and it becomes disjointed and a little sloppy. But there are a lot of dynamics at work that only paint in subtle mattes. There is a vast range of vocals and the drumming is mostly excellent. But the real feat is the atmosphere they've created, spooky and positively unnerving at times. It's so abrasive from the onset that it's difficult to see the layers of musicianship underneath. Unworthy/Humility is no worship service from the cushioned pew, but perhaps a necessary reminder that Christianity is much more gritty and uncomfortable than we'd like. - Wayne Reimer, 6/4/13