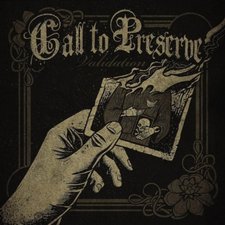 Call to Preserve's new album Validation EP is out; it is their fourth release under Facedown and their first EP to date. They have a solid hardcore background, so how will a shorter release go for them? The album starts off with the song "Exploit, Neglect, Condemn;" it comes in with guitar static into the kick-you-in-the-face hardcore you would come to expect from Call to Preserve. This song, however, lacks any depth or technicality instrumentally, while you get shouted at in monotone.

The next two songs, "Validation" and "Closer," come and go in a flash of the same typical hardcore chord changes, blast beats, and shouting, like found in the first song. With each song coming in under three minutes long, they seem to fade one into another into another of a never ending hardcore blur. Taking each song separately and you see they all have the same formula: a slow, short intro followed by brutal hardcore which slows down to a bass, drums and vocal interlude, and then it jumps back into hardcore.

Coming into the final song, you expect to hear the same song again, but they seem to keep it slow and build it up. This comes as a bit of change in pace that is refreshing as the song continues, falling and bringing it back up until you come to the end with a chorus of gang vocals bringing a good ending to the EP.

All in all, this album is just average. It is very short, clocking in at just over 10 minutes, and if you don't pay attention, you won't notice the songs changing from one to the next. One plus side is the lyrics are deep and meaningful throughout. That being said, it seems that Call to Preserve doesn't experiment, they stick to what they like to play and any fan will find the same exact band that left off at the end of the preceding record.