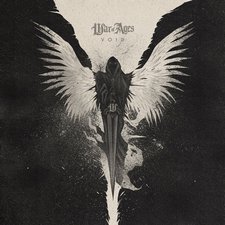 
I have recently found myself falling out of love with metal music. The old favorites are still favorites, but not much in the way of newer metal has been speaking to me. Maybe it's me getting older and getting into other types of music, or maybe metal has just been changing and becoming ever so generic and stale -- I can't quite put my finger on it, honestly. Demon Hunter piqued my interest and provided two enjoyable albums this year, but would War of Ages' newest release, Void, have the same affect? The band has definitely released some solid material over the past several years and their commitment to Christ and proclamation of faith in the lyricism is also noteworthy, with so many other industry standards distancing themselves from their faith -- or separating themselves altogether.

Void starts off strong with "The Watchers." The verses are clean with growled vocals, and the chorus is bigger and melodic, but contains a much more riff-driven sound. The lyrics, "You're too late; caught up in all your praise until you hit the ground. But now you tremble at the mention of His name," immediately pop out. The title track picks up the intensity from a musical standpoint and provides big chunky riffs from the start -- the double time interludes between chorus and verse are also quite a nice touch dynamically. The intensity remains high as "Blood of the Earth" continues, however, the most enjoyable part is the 30-second guitar solo that starts at the 2-minute mark. It's not a crazy lead part, but it adds so much to the tune. One of the most hard-hitting numbers comes up in "Sulphur and Salt." The lyrics open the the song with Leroy Hamp's proclamation, "Thy kingdom come Thy will be done; pillar of salt in the making. You can run, but you can't hide. This is judgment; this is judgment." The song is riff heavy, with plenty of pinch harmonics thrown in, has a nice heavy bridge, and another cool musical interlude and solo.

"Greed" keeps things moving along at breakneck speed. It's one of the least melodic songs present, but they still manage to work some melody into the chorus of this burner. Another serious metal number along the lines of "Greed" is "Wrath." The 3:30-minute track abandons any big melodic hooks altogether and the observation is made that, "The world's stuck in violence." The music makes it the heaviest song on Void and the lyrical content matches perfectly. "Jezebel" begins to wind the album down and opposes "Wrath" as the softest one on the album. The verses on the track are very laid back and have an almost airy feel to them, but the chorus is much more aggressive in nature. Another album favorite is "Brotherhood," with its phenomenal guitar leads throughout and another top notch solo. The song's theme comes together fully in the bridge, "I will fight for you so take my hand. I will fight for you; together we stand." The album closes with "The Return" and fades things out with the sound of static to finish.

Thankfully, War of Ages does not disappoint with Void. The album isn't super heavy by any means, but it offers so much more. Steve Brown's guitar work here is incredible and Jack Daniel keeps proving his addition to the band was a fantastic decision. Not only are they talented players, but it seems as if they are really pushing the band's sound forward. Sure, there are lots of chugs, riffs, breakdowns, and pinch harmonics, but the musical interludes in songs standout in a big way. If you're wanting an extremely heavy metal album to bang your head to, you won't find it in Void. However, if you're looking for those big metal elements, but also want some depth -- both musically and lyrically -- War of Ages have cooked up something special. It's nice to see a veteran band continue to, not only make music, but to grow and mature in a positive way. Void is easily my favorite metal album of 2019.