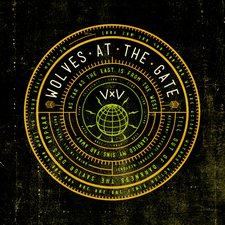 Wolves at the Gate
VxV

Wolves at the Gate made a pretty big splash in the industry when they released Captors in 2012. Now, less than a month shy of 2 years later, the band is releasing their second full-length record with Solid State. Five by Five, stylized as VxV, shows some strong improvements for this Ohio based band. The group still features their same post-hardcore sound, but it's even more polished this time around. That's not to say the record is over-produced (though the production is cleaner), but only to mean the band has continued to improve upon their sound. The guitars seem a little heavier at times and the screams seem to have a bit more bite. Aesthetically, it also features a really cool looking album cover with several nuggets printed inside of the multi-layer circles.

VxV opens with a spoken word segment from John Piper, titled with the same name, about the gospel. After a brief message about Jesus dying for our sins, Nick Detty punches you in the gut with his scream to start "Wake Up." The guitars and drums are heavy and frantic in the verse and open up in the chorus. It's a great opening number that eventually ends with one last reminder of the gospel as the line, "It wasn't you It was the spotless, sinless, Lamb of God who died in you place; that's the gospel," is repeated from "VxV." As the music fades out, another heavy barrage fades in with "Dust to Dust." "Return" is the first time we get to hear a really solid juxtaposition of Steve Cobucci and Nick Detty. Detty starts with screams and Cobucci answers with clean vocals throughout a large majority of the track. This one is an album favorite. The heavy music continues through "Relief" and doesn't slow down until "The Bird and the Snake" starts up. This is one of the softest tracks on the album, but still features a rocking bridge complete with screams.

"Rest" is up next and is more of a rock song. It's actually reminiscent of something like The Almost - especially from their last record. "East to West" starts off with a spoken word section and it's not until 43 seconds in that the album's most powerful song officially begins. This track is VxV's closest thing to something like "Man of Sorrows;" it's a hard rock song, but it still carries with it a sense of worship. Cobucci sings, "Living You loved me though I fought. Dying You saved me, my soul bought. Buried You carried my sins away; You carried my sins far away." The lyrics talk of Christ's sacrifice for us and are also a reference to Psalms 103:12 and how far God separates our sins from us. "Wild Heart" and "The Convicted" bring back the aggression of the first few tracks and provide plenty of metal enjoyment. Finally, "Majesty in Misery" leads us to the final track. In true Wolves at the Gate style, "The Father's Bargain" also begins with a spoken word focusing on Jesus dying for us. The slow beginning lulls you into the false sense of a soft closer, but Nick Detty gives you another dose of screams coupled with heavy guitars at just the perfect time. The song finishes out strongly and caps off an album focusing largely on the gospel and Christ's love and sacrifice. It's a reminder that only Jesus' death and blood provides forgiveness of our sins.

Wolves at the Gate have definitely improved since Captors. Even though the record was highly regarded by many, VxV makes it clear that they were weren't operating at full potential. While it's hard to say whether or not VxV is the peak of their potential, it is clearly evident that they are at least one step closer to reaching it. Wolves at the Gate are offering up a nicely produced album full of post-hardcore and metal goodness. Some may complain that there isn't anything quite like "Man of Sorrows" here, but I would argue that's not a bad thing. One: There has been an improvement in the lyrical aspect of the song writing in general, and two: "Why would you want another song just like that?" Fans should be in love with this album and I don't blame them. This is just another example of why the Christian metal scene as the edge over its secular counterparts.

VxV refers to the military rating of signal strength and clarity, with the eponymous title being the highest possible rating. Solid State hardcore act Wolves At The Gate chose this as their title to represent their presentation of the Gospel, which is admittedly both strong and clear. The creators of Captors are back at the top of their game making very enjoyable post-hardcore goodness as raw and spiritual as it comes. Every song is absolutely enjoyable, high-quality, and great fun to listen to just by themselves. But it is the lyrics and WATG's presentation of the Gospel where they truly shine. "Dust To Dust" addresses the temporal state of the world, asking "What will you gain? / What will you earn? / What is your claim? / From dust we come / And dust we return." The Passion-inspired "Majesty in Misery" melodically lures in listeners before blowing up with "Though all of us have gone our own way / Though all of us have left and gone astray / The Savior restrained, the King He was chained / For a people of unclean lips with our hands blood stained." Closer "The Father's Bargain" wraps things up with the life and sacrifice of Christ summarized worshipfully in true post-hardcore fashion. They even managed to transform the century-old hymn "One Day" into the anthem and album highlight "East to West." Interspersed among the songs are sermon segments that carry the album like a story, as if adding an exclamation point to the goal that no one will walk away from their music without being presented with the Gospel story. In some ways, the album almost feels like a concept album of sorts, though I do not believe that is what the band had intended. For the most part, musically, the songs mesh perhaps a bit too well, in that they may feel like they run together, but in fact, personally, I do not view this as a negative. But there is no reason for any WATG fan, or hardcore fan in general, to dislike VxV. - Review date: 6/15/14, Mark Rice

One of the most talked about Solid State Records signings in recent years is Wolves at the Gate. Their Solid State debut EP was well-received, and their follow-up full-length was praised by critics all around. After a covers EP last year, the foursome are back with their anticipated sophomore album, VxV. It's a mix of hardcore and modern rock (mostly the former), and it's a solid offering with hints of Write This Down and Staple influence. Nothing really sticks out after repeat listens, but those listens are still rather enjoyable. Go ahead and give it a listen on Spotify before committing to buy it, but don't be too surprised if you like what you hear. - 6/2/14, Scott Fryberger of Jesusfreakhideout.com

Tyson Mostenbocker Someday I'll Make It All Up To You: Summer Songs (Acoustic) EP [Tooth & Nail]

idle threat Nothing Is Broken For Good EP [Tooth & Nail]