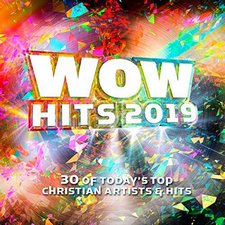 
Every year, Capitol Christian, Provident and Curb/Word partner up to release a compilation of Christian songs called WOW Hits. In 2018, they release WOW Hits 2019.

WOW Hits 2019 starts off with fan-favorite "Grace Got You" by MercyMe, and is placed on the compilation a year after "Even If" was sadly missing from WOW Hits 2018. Next up, you have Zach Williams with "Fear Is A Liar," which is sort of a surprise decision by WOW Hits considering that "Old Church Choir" was not present on WOW Hits 2018 and was still popular heading into 2018. Hillsong Worship makes a new appearance with the "Who You Say I Am," which is my favorite track on Disc One.

Cory Asbury becomes the first Bethel Music artist to be selected for a WOW Hits with his chart-topping tune, "Reckless Love" (I'm hoping WOW Hits 2020 includes one too, mainly Josh Baldwin with "Stand In Your Love"). Chris Tomlin's new single, "Resurrection Power" is next, followed by Francesca Battistelli's "The Breakup Song," the latter of which isn't about breaking up with a person, but breaking up with fear. And Casting Crowns is present with their hit "God of All My Days," which has easily become one of my favorite Casting Crowns songs to date (behind "Nobody" and a few others).

Crowder teams up with former Royal Tailor frontman Tauren Wells to create one of the most soulful Christian songs I've ever heard in "All My Hope;" it's amazing for this WOW album to have it on here, since it has been one of the most popular Christian songs of 2018. Mandisa is surprisingly featured on Disc One instead of Disc Two, with "Bleed The Same (ft. tobyMac)," which is one of the most inspiring Christian songs, and I absolutely love its inclusion here. But it's Elevation Worship, with their breakout hit "Do It Again," that immediately draws my attention. It is definitely deserving of a spot, as "O Come To The Altar" made WOW Hits 2018.

Matthew West is next, with the title track from his most recent album All In, and I feel that it is one of the most heartfelt songs on either disc. Natalie Grant makes a worthy appearance as well with the song "More Than Anything," continuing to prove she has staying power in the Christian music world. Big Daddy Weave's hit, "Jesus, I Believe," is track 13, and I am sure that many people expected it, as it was extremely popular in the first couple months of 2018.

The most unsettling part of Disc One is tracks 14 and 15, "Your Love Defends Me" by Matt Maher and "Revival" by Third Day. Both songs made the track listing of WOW Hits 2018, so it is extremely questionable as to why they are present here yet again. Despite being untimely, they are still great songs, but I feel that "What A Friend" and "Let There Be Light" would be more fitting here, respectively.

The three bonus Deluxe Edition tracks are extremely good. "Worthy of Your Name," by Passion featuring Sean Curran, is a great song and deserved a spot on a WOW Hits, despite being from a 2017 release (maybe "God You're So Good" is reserved for WOW Hits 2020?). Jeremy Camp is surprisingly not on the regular fifteen-song track list with his single "The Answer," which is my favorite of the Deluxe bonus tracks. "Gracefully Broken," by Matt Redman (ft. Tasha Cobbs Leonard), was released in 2017, but is still a great song and is deserving to be included on WOW Hits 2019.

On Disc Two, tobyMac starts us off with the incredible song, "I just need U.," which I pretty much knew would make the album, as tobyMac never really misses WOW Hits (just like Chris Tomlin or Casting Crowns). for KING and COUNTRY unveiled their new song "joy.," which is on their album Burn the Ships and is one of my favorites on this track listing. "So Will I (100 Billion X)," by Hillsong United, is a highlight, and is hard to beat. And, although it is from her 2015 debut (and not her brand new album that recently released), "O'Lord" by Lauren Daigle is included. (Shouldn't it be "You Say"?)

"When We Pray," from Tauren Wells' solo project, is an obvious inclusion, as it has been one of the most popular songs of 2018. The newer version of "HARD LOVE," by NEEDTOBREATHE, featuring Lauren Daigle is included, and they're most likely saving their latest singel, "Forever On Your Side," for 2020. Skillet makes an appearance with their hit, "Lions," and it seems to be another smart decision, probably saving "Brave" for WOW Hits 2020. Next up, Tenth Avenue North's "Control (Somehow You Want Me)" is one of the more popular songs to be included on this disc.

Rend Collective is also included, with their song "Counting Every Blessing," and while I love this song, personally, I didn't expect it to be on Disc Two. Another repeat song occurs with the song "Tremble," by Mosaic MSC, but I actually expected this one, seeing reuses of "Chain Breaker" (Zach Williams), "You Are Loved" (Stars Go Dim), and "When Mercy Found Me" (Rhett Walker Band) on multiple WOW editions in the past. "Point To You," by We Are Messengers appears, and although being absent from WOW Hits 2018, it makes a welcomed addition here.

Jordan Feliz's "Witness" follows, which is, in my opinion, one of the main highlights of the collection. Newer artist Riley Clemmons makes her WOW Hits debut with "Broken Prayers," serving as another highlight. Danny Gokey's single "If You Ain't In It" is missing, but the artist is instead represented by "The Comeback." Last of the normal 15 tracks on Disc Two is my favorite song on the entire album, "Love Won't Let Me Down" by Hillsong Young & Free. Although actually pretty unexpected, the song is a very awesome track that shows that the label can include some surprising things on a WOW Hits.

For the bonus Deluxe Edition tracks on the second disc, "Real Love" by Blanca and "Different" by Micah Tyler are pretty spot on, as they had gotten moderate radio success recently, but "Bulletproof" by Citizen Way, absent from WOW Hits 2018, is a weird addition. It's a good song, but not exactly timely. (Maybe "WaveWalker" would have been a better decision?) The bonus song is another weird selection. "Details" by Sarah Reeves seems to be an out-of-left-field decision for WOW Hits, since Sarah Reeves is not a new artist, having released her debut EP seven years ago. The song is still a good one, but it is a weird choice for a bonus song (maybe Austin French could have been the bonus artist, with "Freedom Hymn" or "Born Again?")

With all of the hits included, there are a handful that feel like they would have been the perfect fit to appear here. Ryan Stevenson ("No Matter What") and Phil Wickham ("Living Hope") were left out, unreasonably. Hawk Nelson ("Miracles"), Unspoken ("Just Give Me Jesus"), and Sanctus Real ("Confidence") all had songs I thought for sure would make it, but were left out for some reason. Artists like Austin French ("Freedom Hymn"), David Dunn ("Grace Will Lead Me Home"), Hannah Kerr ("Warrior"), Britt Nicole ("Work of Art" or maybe "Be The Change"), and Aaron Cole ("One More Day" or "Right On Time") also could have been included here--especially instead of the repeat or older tracks. And songs like "Your Love Defends Me," "Revival," "The Comeback," "Point To You," "Worthy of Your Name" and "Tremble" are very untimely, and deserved to be on WOW Hits 2018 (three of them were, three were not).

All in all, although this year's collection has some low points, it is still a good album; I only had to dock it some points because of "Your Love Defends Me" and "Revival" being repeats. (If I looked at just the tracks, I'd say it's a four out of five-star release, but I pay attention to hold old or recent the songs are and which ones are from previous WOW releases.)