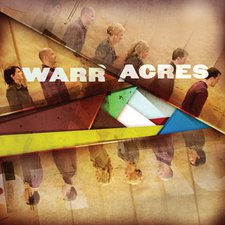 Dream Records is still a relatively young record label, with only a handful of releases to their name. The next on tap from Dream is a new pop/worship group called Warr Acres. Named for the town in which they live, Warr Acres, Oklahoma, the band has signed a deal with Dream to release their new full-length self-titled album to a national audience in 2011. The poppy worship group has a handful of catchy tunes that will most certainly grab the attention of youth groups across the nation.

As a whole, Warr Acres is one of the better releases from Dream Records, but you wouldn't believe me if you only listened to the opening track, "Undignified." Those who were very turned off by the sounds of Dream's Press Play will hear "Undignified" and have a hard time giving the rest of the album a chance. It's almost a spitting image of Press Play's music, with some modern dance music mixed with 80s pop. "Sound The Alarm" follows, keeping a similar sound, and only improving the listening experience slightly thus far. At times, the vocals bear some sort of resemblance to those of Rihanna. "You Are Joy" and "Maker of Miracles" maintains the electronic sound, but the danciness drops off significantly. The general style here is like what Hillsong would sound like if they had a lot more electronic components. The latter of the two songs does display some good vocal work, however, without any noticeable autotuner or anything. "Hymn of Remembrance" follows, a slow ballad that brings in some marching drums near the end. The melody of the song really does give it a sound like it's an authentic hymn.

Warr Acres picks things back up in "Shout Your Love;" it's a weird mixture of Third Day and Anthem Lights, with a very poppy and up-tempo beat and some interesting/odd synth portions all throughout. "Heaven Bound" dives into some new wave territory, like that of the Psycedelic Furs. It brings with it an unappealing vocal melody in the chorus, though the music is some of the best the album has delivered yet. Musically, I would probably call this my favorite track of the bunch, with its 80s vibe that is done quite well. Warr Acres slows things down again for "Savior, Crucified." Vocally and lyrically, it's not necessarily groundbreaking material, but I appreciate the time and effort they've clearly put into the music of the song. "Hold To This Truth" follows, and almost feels like they borrowed the melody of "Savior, Crucified" and modified it for this track. In a way, it feels like a tamer version of that song, with some Owl City-esque sounds sprinkled on it here and there. On a lighter note, the next track, "Shadow of the Steeple," almost gives off a David Crowder*Band sort of feel, with a little bit of BarlowGirl mixed in. It features some good electric guitar work, and some really cool synth during the verses. The core progression in the chorus is a little boring, but overall, it's an album highlight. Warr Acres ends with the rock ballad "Our God Lives." It's an odd track, with a few really slow lines in a waltz time signature, then a few seconds of rock, then more slow lines of vocals. The chorus picks up with some of the rock music, but features a repetitive, Hillsong-style anthemic chanting of "Our God reigns, our God lives!" It's not the best way to end the album, but at least it ends on an inspirational note.

The biggest positive note for the music of Warr Acres is their uncompromising message and stance. Their songs are fully dedicated to God's glory, and their unwillingness to change their minds about Him. Their lyrics express this very well, though I couldn't help but feel like they were saying these things in ways that have already been said countless times. Warr Acres has tremendous potential for expressing things even better if they take time to write new and fresh lyrics. They do have some good music already though; it's a little spastic, with different sounds splattered all throughout, but at the core, it's all some good electronic pop. I appreciate the different route they've taken in their attempt at a worship record. With some stronger lyrics, they can definitely be one of the better worship artists to penetrate the Christian mainstream audience.