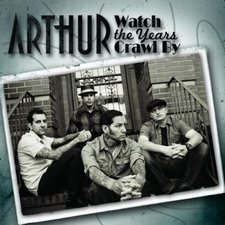 Arthur
Watch the Years Crawl By

Not many albums are in the works for a period of several years (the most notable, Chinese Democracy, took 13 years), but the newest release by MxPx side-project Arthur has been in the works since 2002. The band was formed in 1997 by MxPx front-man, Mike Herrera. Herrera, looking for another outlet to release songs that didn't fit the pop-punk mold mastered by MxPx, teamed up with MxPx drummer, Yuri Zane Ruley, and stage technician, Neil Alexander Hundt, to form Arthur. Shortly after, MxPx guitarist, Tom Edmund Wisniewski, also joined. The band was named after lead singer, Mike Arthur Herrera. The entire band decided to use middle names to set themselves apart from their MxPx fame. The band released Loneliness is Bliss, an EP featuring 8 tracks, in 1998. Even though most fans of the band never expected another release to come, they return with the aptly titled album, Watch the Years Crawl By, in 2010. It's been worth the wait.

The album features 12 tracks, "Thought A Lot" being the only holdover from the original EP, of catchy alt-rock tunes. Most of the group's songs are about love and relationships and are inspired by 50s doo-wop. Though there isn't a song that screams doo-wop, you can definitely hear the 50s inspired guitars throughout several songs on the album. The opening track, "Cold Outside," may throw you off if you were a fan of Loneliness, but it's not a bad thing. The song is very upbeat and has a great alt-rock feel. It's the perfect song to get the album started and one of the standouts for the project. "America" is the next track up and keeps the beat moving. The song on the surface is about a girl, but with some of the lyrics, you get to thinking that Herrera is also talking about the love of his country. "America where are you now? I'm the field, love's the grain, and she's the plow" feel like lyrics that would be in a patriotic song. "Be Still" is the first track that starts to remind you of Loneliness as it brings a more dreamy retro sound.

The album shifts back into high gear with the track "Heartache," which is more reminiscent of The Ever Passing Moment era MxPx. "Tuck You In" slows things back down with guitars that are obviously inspired by a 50s sound and pay homage to the original Arthur EP with the opening lyrics, "Loneliness is bliss" "To Have and to Hold" is an acoustic driven love song and one of the album's best with the lyrics, "You're the love of a lifetime to have and to hold. You're the best of the century and maybe even history. You're mine to have and to hold." This is another track that feels like it could have ended up on an MxPx album, especially given Herrera's love of the acoustic guitar. The strong 50s era rock feel returns with the tracks "Tie Me to You" and "Out of the Blue." Fans of Loneliness will be excited to hear the newly recorded version of "Though A Lot." The song is almost exactly like the original, but has a much better quality and sound to it. "Fortissimo," meaning very loud in music dynamics, is probably the weakest track. The song features dark sounding guitar picking in the verse and a brighter sounding strummed chorus. It's not necessarily a bad song, but it may have been better served as the finale.

The album closes with two more alt-rock songs in "You Bring Me to My Knees" and "Still Haven't Reached You." These are both solid tracks with the former being another album standout. As mentioned before, the album is mainly about love and relationships, but there are a couple of mild spiritual references. In "America," Herrera slightly mentions his beliefs as he sings, "Until I lie down in my grave and Heaven's what I see." And in "Be Still," Herrera makes a slight reference to the Lord's Prayer as he asks, "The weight is bearing down; the king has lost the crown. Has the kingdom come? Whose will has been done?" The rest of the album contains innocent lyrics about love.

Arthur has appeal to both fans of MxPx and fans alt-rock/alt-pop music, giving a very pleasant listening experience. Fans of Herrera's songwriting and insight into relationships are in no way going to want to miss this album. Folks looking for something a little different than the same ole same ole might also going to be interested in this one. While it seems there really isn't anything that hasn't been done in music, Arthur gives a pretty fresh look to the old. The album is a welcomed addition to a pretty solid year of music and is sure to be a favorite of many. With MxPx taking a major cut to their usually extensive touring schedule, we can only hope we don't have to Watch the Years Crawl By for the next release from Arthur.

So who is this band, Arthur? It's made up of MxPx lead singer, Mike Herrera, and fellow MxPx band-members, Tom Wisniewski and Yuri Riley. If you are hoping for fresh, fun, punk tunes from the trio, the first several songs will disappoint you as the group offers music that easily sounds ten years too late. But since most of the album was recorded over a decade ago, it's understandable why their first full-length album, Watch The Years Crawl By, doesn't sound close to cutting edge. The first track, "Cold Outside," is a tolerable upbeat, punk/rock song that succeeds only because of Herrera's recent tune-up. Sadly, the rest of the album is mostly a bad mix of unadventurous tunes, painfully bad girl/guy clichés, and monotonous vocals. The good intentioned themes of songs like "Tuck You In" and "Fortissimo" get lost in a sea of bad lyrics like "Be still my heart/my life just fell apart/be still my heart/don't even start" and "Right out of the blue/we both knew that we should be together." Watch The Years Crawl By is likely a must-buy for die hard MxPx fans, particularly those who have anticipated this release for years. But those looking for a higher quality of punk rock and well written songs should look elsewhere. - Nathaniel Schexnayder, 12/22/10