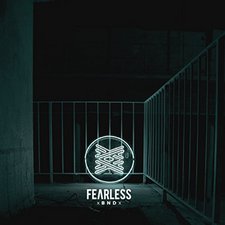 Fearless BND
We Are Fearless


A long time ago, in the mid-2000s, a five-piece band from Modesto, California released a catchy, worship-focused eponymous rock album called Worth Dying For. The album featured male and female vocals, a spoken word in the closing track, and a few electronic touches. In the follow-up album, Love Riot, Worth Dying For explored their electronic side a bit more, resulting in an explosive and energetic record with something for everyone. Then, after releasing the live album Live Riot in 2012, Worth Dying For became quiet...until late 2015. The band rebranded themselves as Fearless BND and began releasing several singles over the course of the next year, leading up to the release of their latest LP, We Are Fearless. The change in moniker seems appropriate given the current cultural climate, but more than that, it was a necessary change given the complete redirection of the band's sound. Fearless BND is not the Christian rock quintet from Modesto anymore--now they're a team of fifteen people leading a church in Los Angeles, and they've decided to forgo their rock roots for an electro-pop sound. The change in sound, it would seem, pays off in spades.

If there is one word to describe We Are Fearless, it is certainly "fun." The album kicks off with the bouncy, summery opener "Brighter," a track that is sure to get listeners' heads nodding, toes tapping, and fists pumping. The next five tracks maintain the momentum, featuring heavy bass beats, finger-snap samples, experimental electronic interludes, and lyrics encouraging listeners to "dance," "jump," "rise," and "lift," making these first six tracks ideal for a cardio workout playlist. One highlight among this group is the country-influenced foot-stomper "We Lift You Higher," which bears a slight musical resemblance to the mainstream hit "Wake Me Up" by Avicii, featuring Aloe Blacc. The track features a tuneful whistling sample throughout, which ties all the sections of the track together as it shifts from acoustic guitar to synths. One note about this first half of the album--while the lyrics are solid, they serve more or less as a vehicle to the music.

Much like Worth Dying For's debut album, We Are Fearless has a high-energy first half and a mostly contemplative second half. One of the highlights in the backend of the album is the longest track on this release, the acoustic-based reflection, "White Flag." It starts with a more stripped-down production, featuring a piano and acoustic guitar before bringing in synths after the halfway mark as the track crescendos. The sparser sound on this track gives the album a pleasant (and much needed) breather, and leaves room for the music to take a backseat and let the lyrics shine through. The worship is sincere as vocalists Christy Johnson and Josh O'Haire sing the chorus, "I'm waving my flag, I surrender / Give You all, no pretender / 'Cause You're my victory / I'm taking a stand, I remember / Heed your call, my Defender / 'Cause You're my victory." This track serves as one of the climactic "breakthrough" moments on the album, the next one being "Revival," the pseudo-closer before the mostly spoken word track, "Shake the Skies." "Revival" builds slowly, beginning with four simple guitar chords and takes off on a sonic journey from there, adding synthesized riffs, clean and processed vocals, and dynamic drum beats. While countless worship groups have sung about revival, the lyrics and vocal delivery here are more raw than the usual "revive our land" fare. Lines like "I want revival, no more survival...Break the idols, raise the altars / So fill me up now, and pour me out / Place your words upon my mouth, the ones that won't come out" reflect the desire for revival and acknowledge our feeble humanity, leading to the conclusion that revival is impossible without full reliance on God's power and strength: "I will triumph in Christ my King... / You conquered it all for me." The true closer, "Shake the Skies," features a spoken word piece inspired by Job chapter 38, performed by Fearless co-founder Jeremy Johnson. This track closes the album on a powerful and reflective note, reinforcing that as fun as this album is, the purpose behind it is to minister to listeners and spark revival. The bonus tracks following are also solid--some listeners may prefer "Anchored II" over the original, and the remixes of "Never Let Me Go" are enjoyable, albeit unnecessary.

The team at Fearless knows how to successfully garner excitement for an album. Eight of the tracks on We Are Fearless were released as singles over the past year and half, and all of these singles have music videos on Fearless BND's YouTube channel. However, it's not just about music; while Fearless is a band (or "BND"), it's also a ministry with its home at Fearless Church in Los Angeles. While Worth Dying For is no more, Fearless BND still carries on two of Worth Dying For's defining traits: their ability to entertain and their passion for authentic worship.