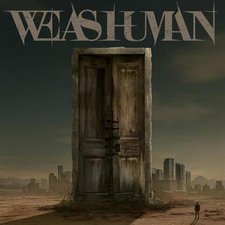 This Tuesday, eager listeners will rush out (or online) to purchase the new Skillet album, Rise. Chances are, some of those listeners will also purchase another new record that is firmly riding on the coattails of Skillet's success. This other album is the debut, self-titled release by We As Human; an album that bears more similarities to Skillet than simply its release date. In fact, Skillet's Jon Cooper was responsible for "discovering" We As Human and helping them sign with Atlantic Records. Cooper's influence is all over this album, up to and including a guest vocal appearance.

Unfortuntely, the album doesn't get off to a very good start. "Strike Back" manages to encapsulate everything that is wrong with hard rock right now: generic instrumentation and melody, overly melodramatic vocal delivery, and woeful lyrics. In fact, when the song says "You're gonna suffer; hit me, I hit back harder... it's your darkest hour," I'm really not sure who the song is talking to. It could be Satan, but that seems like shaky theology. If it's about another human, then the attitude doesn't seem very Christ-like. Either way, the track sounds like its primary goal is to end up on a promo spot for the NFL. Thankfully, the album improves some after that point, although the following track is equally weak.

The unquestionable highlight of the album is "Bring to Life," which capably nails all the emotional high points and has enough instrumental variety to keep things interesting. In terms of songwriting and melody, this is the best We As Human have to offer right now, and it's pretty good. "Let Me Down" also has a pleasant modern rock melody, and frankly, the remainder of the album struggles to keep up with these two tracks. "Zombie" tries valiantly, including an appearance by John Cooper, but the song can't recover from the feeling that it could be a Skillet B-side under another band's name. Meanwhile, "We Fall Apart" attempts to be an effective ballad but is dragged down by remarkably cheesy lyrics. The remainder of the album continues to be unremarkable, although Lacey Sturm (formerly of Flyleaf) adds some much-needed life to "Take the Bullets Away." A common problem that keeps coming up through the entire album running time is uneven songwriting between verse and chorus. The focus seems so heavily directed towards creating a climaxing chorus that the melodies in the verses fall by the wayside, resulting in disconnected song structure and dull verses.

If there is one word to describe We As Human, that word would be "safe." While clearly aiming for the hard rock market of bands like Red and (of course) Skillet, We As Human hit all the right notes while simultaneously never venturing out of the genre's norms. It's hard to imagine any fan of the genre being disappointed in this release, simply because it is clearly calculated to appeal to what listeners are already expecting. There's big guitars, bombastic vocals, and melodies that soar when expected and then mellow exactly when they should. The only moment where the band truly takes a risk is in the lyrics of the final track, "I Stand." After an album full of generically vague lyrics, I was pleased to hear the band directly reference Jesus and even make a point about the problem of abortion. Sadly, that one moment is the exception among an album that is, lyrically and musically, far too conservative.

The problem with all this is that it ends up being predictable and slightly cliche. While a decent portion of the tracks are enjoyable, there's nothing to recommend them over what you'll hear from the many bands already established in the genre. The melodies aren't particularly memorable, the instrumentation is average, and the lyrics range from serviceable to unintentionally humorous. We As Human is by no means a bad album, and it might even be a "good" album, but that's it. There's too much re-treading of old ground, too much adherence to tired cliches, and not enough boldness in songwriting to really call this album anything other than average.

Formed in 2005 and "discovered" by Skillet's John Cooper several years later, We As Human and their self-titled major label debut is the newest arrival onto the Christian Rock scene. Eager to make themselves known to the world, We As Human has put together one rock fest of well-made and enjoyable generic rock (imagine the musical quality of RED mixed with the general sound of Thousand Foot Krutch with lead vocals similar to Seventh Day Slumber's Joe Rojas). Already achieving success on the radio with two songs reaching #1 on the Christian Rock charts (thanks mostly to the heavy marketing campaign for them fronted by Cooper), this debut looks to be one of the more successful debuts of a Christian rock band in recent years.

Opening with an aggressive rocker in "Strike Back," the band does a good job at snagging the listener's attention, and the made-for-radio rocker "Dead Man" keeps that attention going through the second track. "Bring To Life" keeps the theme of radio-friendly rockers going, leading into the rock ballad "Let Me Down." Things get a tad more interesting on "Zombie," featuring John Cooper himself, bringing the aggression back up to the level the album opened with. But the definite highlight of the album is the seventh track, "Take the Bullets Away." Former Flyleaf frontwoman Lacey Sturm turns in the star performance here, with her screams adding a tasty flavor to WAH's Justin Cordle's vocals. And finishing the album on a solid note is the anthemic "I Stand." I can't complain much about the technical side of the album, and I'm relieved to report that they avoided falling into the trap of making half the songs ballads and instead maintain a healthy dose of aggression throughout. Lyrical themes concern the battle between our spiritual and sinful natures.

With this album, We As Human has firmly placed themselves into the "solid-but-unspectacular" category. Fans of Skillet and RED and possibly even 12 Stones and TFK will be eager to get their hands on this album, but there is otherwise nothing new here. It is certainly a worthy debut, but just don't expect anything spectacular. - Mark Rice, 6/23/13