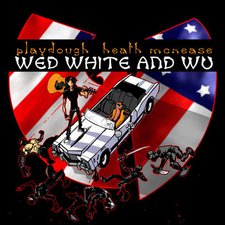 One of the most influential hip hop groups to ever take control of the underground scene is the notorious Wu Tang Clan. Whether you're a fan or not, if you like hip hop, you have to admit that they had a major impact on the genre, with artists like Ghostface Killah, RZA, Method Man, ODB and a long, long list of affiliates called the Killa Bees. As a way to shown some love for the crew, as well as another way to give fans even more music, hip hop talents Heath McNease and Playdough are offering up a free mixtape together, with each track borrowing a beat either from a Wu Tang track or a track from one of Wu's solo projects.

I feel I must start things off with this: I'm not familiar with the Wu Tang Clan. I know some of the names and have heard some of the tracks, but I couldn't tell you who's who or song titles. I grew up in a house that listened to rock and alternative, and that's about it. So my excitement for this mixtape wasn't as high as it would've been had I grown up on the Wu. However, my excitement was still rather high, as Heath McNease and Playdough are two of the dopest emcees around right now. They've each had several releases in the past year, each high quality releases, and they've showed no signs of slowing down. They keep it up with Wed, White & Wu.

Wu Tang beats are known for being pretty raw, and to keep the tracks to the originals, Playdough and Heath kept them just how they were, with no extra producers to clean things up (the only exception is DJ Sean P on "The Ego Has Landed," though he's there for scratches and not production work). What's interesting (and lovely) about the beats is that, while they're some raw, old school hip hop tracks, hearing Playdough and Heath rap over them makes them feel more modern than what they are. And they don't really change up their style all that much; they just work the beat to their advantage. It makes it easily appealing to fans of either school of thought. Fans of more current hip hop may be more even more at home listening to Wed, White & Wu when they hear three or four soundbytes from popular NBC shows The Office and Community (as well as a quote from Community's Donald Glover about his rap name, Childish Gambino - each of which are relevant to the song, and not randomly placed).

Those who follow Heath McNease's albums have heard Playdough make several appearances in his music. And when that's happened, it's been pretty ideal. So the thought of them teaming up for a mixtape is pretty terrific. They sound great together, and play off of each other very well. Their styles are pretty similar, while still maintaining their own uniqueness. As with Heath's mixtape earlier in the year with For Beats' Sake, he and Playdough have enlisted quite a star-studded list of guest emcees to make appearances. Fellow Deepspace 5 members Freddie Bruno, Manchild and sintax.the.terrific show up to make quite an impact on their respective tracks. "Lurch" is actually one of the strongest tracks vocally (though the music gets to be a tad hard on the ears). While Heath doesn't show up on this one, Playdough teams up with his Phonetic Composition cohort Freddie Bruno, as well as the phenomenal RedCloud who always impresses. Humble Beast poet rapper Propaganda gets "The Ego Has Landed" off to a great start, while DJ Sean P does his turntable magic through the track. As for the rest of the guest vocalists, I've heard their names but have only heard a song or two of theirs, if anything. Guilty Simpson shows up early on in the track list for "You Know My Steez," while MG! the Visionary takes the reins for the hook of "Ol' Dirty Baptist." We also hear from Ohmega Watts, The Bodega Brovas and Goldin Child; all artists that you may want to look into.

Whether you're a fan of the Wu or not, I recommend Wed, White & Wu. All the artists involved are extremely talented, and I don't see how a hip hop fan could be disappointed with the outcome of this mixtape. Hardcore Wu fans will be pleased to hear all the creative shout-outs to different Wu albums, songs and members, and non-Wu fans will just enjoy the flows and lyrics from Playdough & Heath McNease. My favorite tracks here are "#CougarSwag," "Ol' Dirty Baptist," "The Ego Has Landed" and "Gravel Spit." Wed, White & Wu is a free download at their Bandcamp, with some physical copies and shirts available for different donation amounts.