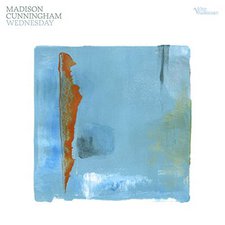 
With a growing national fan base that includes Harry Styles (she was to open for his 2020 Halloween show that had to be postponed due to COVID-19), and a list of glowing accolades and reviews, Madison Cunningham is poised to break out in a big way. Still in her early 20s, with talent oozing from every pore, Cunningham released a terrific album in 2019, called Who Are We Now, that caught the attention of the aforementioned pop star Mr. Styles. She can be counted among a growing list of artists of faith who have the talent, calling, and favor from the market to make music for a wider audience than the CCM scene exclusively.

Inspired by extra time at home and a desire to grow in her songwriter craft, Madison recorded this four-song EP of covers called Wednesday, as a bridge to new original music soon. Cover albums are tricky to pull off well; with song choice, and interpretation as key obstacles to hurdle successfully, I'm happy to report she clears both expertly.

Laudably, the choice of covers is near impeccable, though when looking at the tracklist, I was a little nervous to see iconic artists like Tom Waits, John Mayer, The Beatles, and Radiohead as the choices. The worry was needless, as Cunningham not only interprets the songs well, she builds in freshness to these well-known tunes. In fact, and this is absolutely not a knock, the whole EP has a lullaby quality to it. Not in a sleepy or boring way, but in a more comforting and reassuring fashion. "Hold On" takes a weary, though pastoral, edge that I found encouraging. John Mayer's "The Age of Worry" gets stripped of its bombast to a more minimalist offering, featuring a killer guitar-picking pattern, even more fully demonstrating Cunningham's undeniable talent.

The Beatles tender "In My Life" gets a male/female harmony that is oh-so-beautiful, and demands multiple listens. It's a study in nuance and terrific vocal blending. In fact, it bears mentioning that each of these four songs is delivered with vocal interpretations that are each different and fresh. Cunningham surely knows how to use her voice as another instrument to tell a story. There's just something about her tone and timbre that causes you to lean in and listen closer. Lastly, Radiohead's "No Surprises" is emptied of its weary paranoia in favor of melancholy sweetness. It's the biggest highlight of the album, and a must to include in her live set henceforth.

Overall, Wednesday is a triumph, leaving me wanting for more. It's artists like Madison Cunningham that leave me with great hope for the future of music going forward. The decade of 20s and beyond looks bright, and from albums that hit all the right notes like this one and its predecessor does, it sounds like we're in more than capable hands.