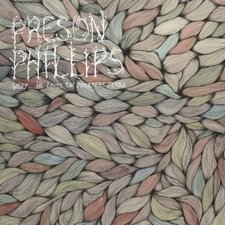 A worship leader and pastor at Watermark Church in Tampa, Florida, Preson Phillips is an acoustic singer/songwriter signed to Come&Live! Records. His first outing, The Observant & The Anawim, put his heart on display and gave the listener a great look at where he is in both message and musical style. His folky acoustic worship tunes make a comeback with his Come&Live! follow-up, Weep...He Loves The Mourner's Tears.

Interestingly, with Phillips not being so well-known in the music industry yet, The Observant... got some help from members of an extremely well-known hardcore group: Underoath. Now, while Aaron Gillespie doesn't make a return appearance, Tim McTague does. Not only did he produce all of Weep..., but he also played most of the electric guitar that you hear, including "People of His Choice," "Breather of Life" and "Pilgrim." No vocals, however, as he did in The Observant...'s "Then They Will Know." McTague's guitar playing is nothing less than you'd expect from his work with Underoath (obviously a great deal softer, though). As far as the rest of the guitar work, it's impeccable. It's obvious that Phillips is definitely a very skilled guitar player, and it's awesome that he incorporates that into his worship as part of his gift to God. Some of the songs also include a female vocalist who harmonizes with Phillips. When she shows up in her songs, her voice fits in very nicely, creating a beautiful sound to behold. It's all blended in with some drums on a couple of occasions, some electric guitars and even an accordion (used sparingly, however). Combined with Phillips' Reese Roper-like vocals (despite the vocals being weak at times), it makes for a worship album that might not catch the ear of all worshippers, but still retains a great sound for fans of indie and folk music.

Even if one doesn't much care for the sound of Phillips' music, one will most likely enjoy his message. The lyrics are rooted in the Old Testament, but still focus on the mercy, love and grace we find in our Redeemer (and he does of Jesus, too, despite the Old Testament focus). "Psalm 23" is a wonderful rendition of that Bible passage (and it uses some of Isaiah 53 for the chorus). Phillips sings for how God cares for us (and how close He always is to us) in "Pilgrim" ("Knock, He knows the sinner's cry, weep, He loves the mourner's tears, watch, for saving grace is nigh"); he offers his all to God in the upbeat "Marked By Reformation" ("This is my song of penance, crying in repentance, longing just to trade my sins for Your forgiveness"); and in "The People of His Choice," Phillips laments briefly ("Let the elders speak His name, let us hear the ancient tales and let us mourn for how we've failed"), but then recalls his faith in God's promises ("Let the children now rejoice, when it falls upon their ears, the proclamations of God's voice, as long as life beats in these shells, keep Your words upon our lips and living water in our bowls, our hands are raised calling out to be redeemed from certain death's eternity, give us new names, keep us ever close to Thee, once enslaved but now made free").

Fans of The Observant & The Anawim will find much to love in Weep...He Loves The Mourner's Tears. The honesty, the charm and the intricacy from Phillips' debut have carried over and it makes his new album just as brilliant as the first. The only thing I could ask for is more than nine new songs with each new album (Weep... has ten songs, but one of them - "Hallelujah" - is a redone version of the song of the same title from The Observant...). But with the beautiful songs he offers up as his gifts, it doesn't matter, because they all make the listener want to listen again and again, while offering up their own gifts to our loving Father.