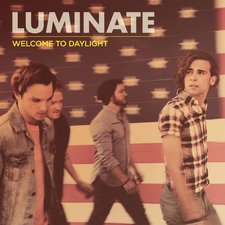 With a slew of new artists that flooded the Sparrow Records roster in the past few years, Luminate hit the scene a little later in the game. However, with some of these new artists no longer on the label (such as Danyew and Sarah Reeves), Luminate has stuck around after one EP and a promising full-length debut. Welcome to Daylight is the natural next step, and it mostly strikes a chord.

Where Luminate succeeded best with their debut Come Home was their sense of understated and simple imagery. Every song knew where it wanted to go, and it mapped out the message beautifully for the listener; even if wasn't the most novel pop concept without a basic followed procedure for each track, the light keyboards and guitars throughout cemented the then-quintet's base as a likable band for the radio airwaves. With Welcome to Daylight, however, Luminate seeks to try out far more elements than the last time around, and for the most part, the daring risks they take to broaden their sound are successful. As the album starts off with the title track (the strongest inclusion on the record), the opening reverberating synths give an immediate indication of a more developed band-sweeping and deep electronic pop rock that's hard not to appreciate. On the flip side, sometimes these risks sacrifice some charm in the process. One area that Come Home particularly shined at was its ability to maintain equilibrium between accessibility and artistic simplicity. Though that was part of the style, Luminate never tried to do anything too fancy with many songs in the past, and even the upbeat singles the band chose ("Innocent," "Healing In Your Arms," "Come Home") still held onto this truthful and endearing sense of quality without overpowering magnitude. With the exception of "Battle for Peace," Welcome to Daylight in general lacks some of this creative minimalism that made the preceding album engaging. Tracks such as "Never Give Up," "This Ends Tonight," and "Living In a Memory" are just a little too overwhelming when compared to the more restrained excellence throughout, and it can merely make the album more loud and not necessarily more powerful. Luminate specializes best in highly singable anthems of pop worship variety, and while that's not changed for this effort, some tracks aren't as lyrically strong as they could be. "Heal This Home," for example, relays the vignette of an eroding marriage that needs a boost in genuine love, but its lines feel out of place as if they were from a devotional book rather than from an inspiring song it means to be ("they were living in a world of make-believe, and they couldn't see the cracks growing underneath/but God restores and opens doors, to the love, to life they are looking for"). "This Ends Tonight" is another song where singer Samuel Hancock speaks directly to the devil and his temptations, but it feels more canned and cheesy than strong and foreboding ("Pardon me, but I think that you're mistaken/I'll never run away, the fight is here and now/I can see you're simply masquerading/there's no way you're ever going to take me out"). While lyrical areas such as these are more exceptions than rules, they prevent Luminate's overall approach from becoming anything beyond a little above average, and given the risks they take otherwise, they disappoint more than they would otherwise. The exciting aspect of Luminate's approach on Welcome to Daylight is that they've evolved in the ways that matter the most: less formulaic songwriting and a more diverse offering in their material. Luminate will be at their very best if they can join these strengths with Come Home's strong points of ease, lyrical honesty, and musically modest grandeur. But with two decent attempts now behind them, Luminate is poised to make something truly spectacular, even if Welcome to Daylight isn't quite it. - Review date: 8/26/12, written by Roger Gelwicks of Jesusfreakhideout.com