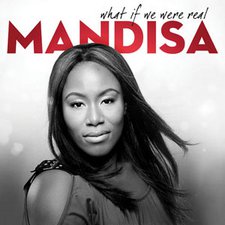 Mandisa
What if We Were Real

In the past few years, Mandisa has earned a place among CCM's leading ladies with her powerful voice and sweet, encouraging personality at the front of everything she does. Her positive and affirming messages of love, true beauty, and hope encourage and resonate with her audience, while her accessible music fits right in with her peers on Christian radio. For her third full album, What if We Were Real, Mandisa sticks to the winning formula of the big pop anthems and powerful ballads that she does best.

Mandisa's 2009 release Freedom had its share of style experiments, bringing in some gospel flavors and almost 90's-style ballads, and at some points the deviations left it feeling disjointed. This time around, she stays focused on a a solid, upbeat pop sound that pulls from diverse styles while staying consistent. Her expressive, inviting voice is as stunning as ever, whether climbing to powerful heights in "Stronger" and "Lifeline," evoking tenderness in ballads like "The Truth About Me" and "Just Cry," or displaying a playful, edgy attitude in "What if We Were Real" and "Temporary Fills." No matter what kind of song she's performing, she owns it and gives it all she has, and her big voice carries the record from start to finish.

Though Freedom had awkward moments in some musical choices that didn't quite fit in the album's greater arc, thankfully, that doesn't happen here. What if We Were Real is more consistent overall, just the right mix of big anthems that draw from R&B, rock, and straightforward CCM pop and a few ballads to break things up. It's a well-paced mix that maintains a carefree, upbeat attitude. Lead single "Stronger" starts things off with a strong beat and catchy, singable hook, offering encouragement that "the pain ain't gonna last forever... This is gonna make you stronger." The title track has a touch of edgy, almost rock attitude, as she challenges listeners to take off their masks and poses the questions, "What if I share my brokenness? / What if you share how you feel? / What if we weren't afraid of this crazy mess? / What if we were real?"

One of the finest musical moments comes around the midpoint in "Say Goodbye." It starts with a haunting piano intro then builds to a heavy drum and synth chorus that gives it a weight and power that fits right in with the current pop scene. "Good Morning" is catchy, danceable fun featuring TobyMac that sounds like it could've come from one his own albums, but is still distinctly a Mandisa song. Even when she tries out some variety in the gritty, rock-edged "Temporary Fills" and the R&B gospel groove of "Free," they aren't musically out of place. "Lifeline" wraps things up in a stirring anthem reminiscent of "You Wouldn't Cry" from her previous record, with open music and soaring vocals to match; it's a beautiful closer.

Everything sounds great to be sure, between the slick production and Mandisa's strong singing, but unfortunately, the biggest downside is that the the lyrics don't always hold up as well. It's encouraging to see that Mandisa co-wrote a few songs, including the title track, a personal touch that makes a difference. "What if We Were Real," for example, feels believable, a message that's true to the artist. But for the most part, so many songs by so many writers creates a distance and leaves it more like a collection of generic singles than a cohesive album. Christian cliches show up in lines like "Stronger's" charge to "just fall into the arms of Jesus," and "These Days," while a cute, relatable song about dealing with life's annoyances ("Mondays... bad news... breaking in new shoes"), ends up making a point that sounds a little too much like Francesca Battistelli's "This is the Stuff." The messages are encouraging enough and the songs certainly hint at something deeper, but they tend to just stay on the surface.

In spite of that, What if We Were Real works well for what it is, the kind of feel-good pop record that can make summer drives a little more fun or bring a smile on a bad day, and this is precisely where Mandisa excels. The sound is current and the songs are cohesive and uplifting, bringing a mix of genres together through her versatile, powerful voice. Though not incredibly unique or thought-provoking, fans of Mandisa should be delighted and can look forward to a danceable, singable good time in her newest release.