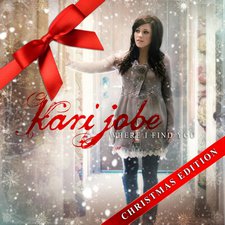 Kari Jobe
Where I Find You: Christmas Edition

For a couple of years now, several record labels been shamelessly re-releasing some of their artists' most popular albums around the holidays with the addition of a few new Christmas tunes tossed in for good measure. The upside to this questionable marketing strategy is that fans can now purchase and download select additional tracks from these artists to add to their arsenal of holiday music. The downside, however, is that usually the album cover is retooled and decked with snowflakes, bows and Christmasy colors in an attempt to spruce up the rest of the completely non-seasonal studio album with some holiday flair. The end result is bittersweet.

I honestly do not intend to rain on Kari Jobe's parade with my personal frustrations with this thing that we call "Christmas Edition," as previous releases from Matthew West (Something To Say: Christmas Edition), Audrey Assad (The House You're Building (Christmas Edition)), Chris August (No Far Away: Christmas Deluxe Edition) and, more recently, Kutless (Believer: Christmas Edition) have all had regular album re-releases given the "Christmas Edition" treatment. While, in most cases, the addition of new Christmas songs from artists is a welcomed thing, adding them to a studio album that otherwise has nothing to do with Christmas music makes absolutely no sense. In the context of Kari Jobe's Where I Find You, its beautiful and appropriate album closer "Here" is no longer the closer. Instead, listeners are suddenly transported from the album that was released this past January to the forthcoming Christmas season when the first of these bonus songs begins. (Side note: I realize this same problem of intentional closers no longer being closers also applies to Deluxe Editions, Special Editions, Bonus Tracks, Re-releases, Extended Editions, etc -- but in most of those cases, they're not seasonal songs being added to a non-seasonal album. Still, I feel it changes the album's original intended structure.)

And again, I'm hardly a Scrooge when it comes to Christmastime or Christmas music, but re-releases like this merely capitalize on the album the holiday tunes piggyback on and, in a way, debase the original artwork the music-maker has created. So what's an easy solution? Present the new songs via an all together separate Christmas single or EP to make these songs available to the fans and holiday-music-buying masses. Ultimately, the three, brand new Christmas songs that are attached to the latest studio album from Jobe are lovely in and of themselves. Presented as part of, perhaps, a When Hope Came Down: A Christmas EP (just spitballing here) would seem to be much more fitting. But, alas, I digress.

Where I Find You: Christmas Edition--whether you love the idea of it or hate it--is thankfully a digital release, with each new track available for your purchase separately. If you already purchased Where I Find You when it released in January, fear not; you won't need to buy the whole kit and caboodle again just to get three new songs. The first one, "When Hope Came Down," opens with sleigh bells and a base style that otherwise actually fits with Kari's signature worshipful sound. The piano is here to accent the track while a standard worship music beat is provided as Jobe cries, "All of the angels lifted up their voices and filled the night with 'Hallelujahs' / God is with us now / Everyone come and join the heavenly chorus / Our Savior King is here before us / Oh to hear the sound, the song creation sang when hope came down." "Messiah" follows, another sleigh bell driven tune that is peppered with piano and kissed with Jobe's soft vocals. Lyrically, it's cut from the same cloth as "When Hope Came Down," singing this time about how our "Messiah has been born to us." Finally, Jobe gives us the lone cover in this holiday trio, a lovely rendition of the worshipful classic, "O Holy Night." Her take on the song first appeared on Jobe's debut Christmas venture, a full-length holiday album titled Bethlehem that she self-released in 2007. This version is a completely new recording. Given the common theme of our Savior being born, these tracks all bear a distinct worshipful feel and heart, while remaining fittingly Christmas in theme. And while I'm sure most Christmas music enthusiasts really don't need yet another cover of "O Holy Night" (although it is one of my most favorites), Kari does a fantastic job on it, making it one of the better modern takes.

Clearly, it's tough for me not to get Grinchy about these Christmas reduxes of otherwise completely non-seasonal studio albums, but no matter how you look at it, we're still getting new Christmas songs to add to our annual seasonal Christmas catalog--one way or another. And, I suppose, that's ultimately all that matters. Admittedly, though, I would have also loved to have seen these three songs fleshed out to a more generous six or seven song standalone EP (maybe next year?). If you haven't picked up Where I Find You yet and are content with having an exclusively digital release, this is obviously the bargain buy, but if you already have the music from Jobe's latest and are interested in her new Christmas offerings, you'll want to snag these Where I Find You: Christmas Edition exclusives separately.