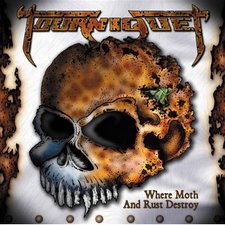 Tourniquet
Where Moth And Rust Destroy

You can tell just by looking at the album cover that Where Moth and Rust Destroy is metal and nothing less. Tourniquet delivers an hour of solid metal; It's not death metal or metalcore, but some thrash metal, reminiscent of Megadeth or Metallica. The Megadeth comparison is quite accurate, too, since the guitarist of Megadeth joined Tourniquet as a guest to add his guitar skills. These guys have been around for decades now, so fans that have not already experienced Tourniquet, but enjoy the less scream and growl oriented metal, should be sure to check this out.

Where Moth and Rust Destroy starts out with the title track that comes in with a seemingly slow intro. When the slow soloing begins, you realize the focus on guitar and get prepared for some great solos to come. The first song gets things started nicely and leads into the shortest track on the album (3:31), "Restoring the Locust Years." It's a good faster-paced song and, believe it or not, the lyrics "manifold in misery, symbiotic history of trials" manage to get stuck in your head quite easily.

The following song is one of my personal favorites, "Drawn and Quartered." A song about Christians being martyred in coliseums for the citizens of Rome's entertainment, it talks of the people having little value, and paints a gruesome picture of life in the times of Nero. The song contains plenty of excellent guitar soloing and a fast paced drum beat until about halfway through where it slows down but fools you by later picking up into my favorite solo in the song. "A Ghost At The Wheel" is also a good song and the second shortest (4:19), but it's not as unique or as interesting as songs like "Drawn and Quartered" or "Architeuthis." "Architeuthis," a song dedicated to the giant squid, is written to show that even though we can't see something, it doesn't mean it isn't there. It likens the idea to how we can't physically see God, but we can know He's there.

"Melting the Golden Calf" discusses having no other gods or idols before the one true God. Following is "Convoluted Absolutes," a call to arms to raise our awareness of right and wrong, find things out for ourselves, defend what we believe and not conforming to what the world tells us. Now, the longest song on the record, "Healing Waters of the Tigris," is another favorite, but unfortunately is a little ruined by an overly long and boring intro. Though I do enjoy the Egyptian feel of the intro, it could have been shortened or intensified to help keep interest in it. It also does pick up a lot after three minutes, which is followed by an impressive four-and-a-half minute long solo.

Sadly, after eight good tracks, Tourniquet ends Where Moth and Rust Destroy on a long boring note with "In Death We Rise." A whopping seven minutes of low distorted guitar and low monk-like vocals, which are almost completely incoherent, are nothing but a waste of time.

Even though the last track is a letdown, Where Moth and Rust Destroy is a very good album, with thoughtful and spiritual lyrics, good sound quality, and a fairly unique sound and song style in today's modern music. The guitar work on the album is wonderful, the singing can be good (but the vocal work switches around a fair bit so it takes a slightly more open mind), and I have no clue what makes the drumming amazing, but Ted Kirkpatrick has quite the drumming reputation (having been featured in magazines and considered drummer of the year for 11 years). The lyrics are written by Kirkpatrick and are no longer using medical terms such as their earlier songs. Also gone is the use of classical instruments, like flute, banjo, etc., but even though their style may have changed, old and new fans should enjoy Where Moth and Rust Destroy.