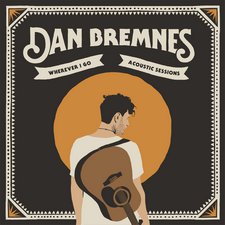 
These days, it seems an artist is never truly done releasing an album. One need only take a glance at the discography of their favorite band or singer to see that any given project usually sees the light of day in its original format together with an extended, remixed or acoustic version - or some combination of the three. But, while many, if not most, of these latter iterations seem little more than commercially driven lesser cousins to the first installment of the work in question, in rare instances a given release's second or third showing actually manages to stand on its own as a distinct and worthwhile musical entity.

So on which side of the fence does Dan Bremnes' Wherever I Go (Acoustic Sessions) fall? The answer to that question, unfortunately, isn't quite cut and dried. On the negative side of the coin, tracks like "Going Together" sacrifice the catchy pop-soul groove of their predecessors, rendering the newly-worked compositions lesser cousins, at best, to their non-acoustic counterparts. Likewise, "Speak to Me" and "How You Love Me" were already more meandering than engaging, meaning that neither the first nor second versions are likely to leave much in the way of a lasting impact.

On the other hand, "Searching for Something" dials back the too-rushed approach of its forebear and comes out decidedly better for having done so. In the same way, the surging orchestral flourishes employed on "Weakness" are an absolutely sublime addition to that song. And the brilliantly sparse arrangement of "The Way" make it a totally different, but even more transcendent, offering than the breezy, more rhythm-heavy original. Indeed, the cut isn't merely the strongest entry on the album, it is arguably as beautiful and poignant a pop song as any produced this year.

In the end analysis, even though Bremnes' latest outing only intermittently hits the proverbial sweet spot, it still contains more hits than misses. And when he well and truly locks into the pocket, as he does on "The Way," the results are nothing short of stunning. This doesn't happen quite often enough to elevate Wherever I Go to must-have status, but there are more than enough of these moments to make it, far and away, his strongest showing to date and a record worth investigating by those who prefer their music on the softer, more organic side.