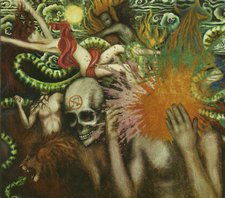 Showbread
Who Can Know It? - Limited Edition CD/DVD

Being an independent artist isn't easy. One of the biggest problems independent artists run across is having little to no money to their name, which makes it hard get studio time to create new music. For Showbread, the making of their first indie album with Come&Live! (their first indie album since the 2003 album Life, Kisses and Other Wasted Efforts) was completely funded (about 200% of the funding they needed) by their amazing fans. Everyone who donated to the funding of the album received a gift based on what they donated. For some, it was a limited edition copy of Who Can Know It? that included some pretty cool extras and a DVD. This review will focus on the content available in the limited edition. For a review of the ten-track standard edition, please click here.

The limited edition contains five additional tracks. The first is a short one entitled "Only Jesus Loves You More Than I Do." It's a short but sweet love song that vocalist Josh Dies wrote for his wife, Abi. It's a simply-constructed song that, musically, could've fit in pretty well amongst the rest of Who Can Know It. Next is a demo version of a song called "The Drain." In the CD insert, Dies mentions that during the songwriting sessions for the new album, "The Drain" was actually the first song they wrote. As a demo version, it's not a track that I would revisit as much as the rest of the album, but if you give it a thorough listen, you can see how good of a song it would be had they worked on it and made a legit recording for it. "Minamata Disease" was originally released through the Showbread fan forums, Raw Rock Militia. It was released under Josh Dies' solo project name, Dies. It's strictly Josh, an acoustic guitar and some background vocals from the rest of the band. It works really well for the album, as does the following, also acoustic, track. It's an acoustic rendition of "Deliverance." I was familiar with the normal version of the song, then I read the intro of the CD insert. Dies talked about wanting to write songs that could be stripped down to an acoustic guitar and vocals and still be as beautiful. Reading that and then listening to an acoustic version of one of those songs shows that they've definitely accomplished their goal. The acoustic "Deliverance" sounds just as good as the full version, minus the fact that it's a demo version, and does contain some of the nuances usually worked out during production. The final new track continues the acoustic sound, bringing a somewhat vocally haunting rendition of the old hymn "It Is Well With My Soul." I've always enjoyed Showbread's worshipful songs, and I can't help but appreciate the inclusion of this track. The vocals are a bit droning, but overall it's enjoyable and very humble. You know their hearts were in it all the way. The lack of production in the new songs is very easily forgivable, given that they are demos (and are clearly marked as such).

The DVD included in the packaging is called An Awful Void. It's approximately an hour long, and chronicles Showbread's time in the recording studio during the making of Who Can Know It. It's interesting to watch as they work with longtime producers Rich Veltrop and Sylvia Massey and see a behind-the-scenes look at how a Showbread album comes to life. We also find out about new things they did during the recording that they've never done before in the studio, such as spreading out the playing of the instruments between all the bandmembers. Getting to watch the recording process after listening gave me a new appreciation for the music and really made me want to listen to the album all over again. In addition, An Awful Void shows the bandmembers talking about the band and their direction, as well as sharing their hearts with the viewers. And of course, they have a little fun as well. It's a great treat and a must for Showbread fans.

The Who Can Know It? [Limited Edition] is the best way to experience the album. Sure, the ten-track standard edition is fantastic on its own, but to listen to the album, watch An Awful Void, then listen again is a thing of beauty. Not to mention that the expanded artwork is beautiful as well. A little risque, yes (the cover features paintings of two nude women with their parts covered by flowing ribbon), but wonderfully-painted, and there's a lot to take in. It's very dark, with an exploding head, a creepy-looking demonic figure and depressing clouds, complementing the dark nature of the album. My favorite part, though (also complementing the positive themes of grace and victory in Jesus found within the darkness), is the snake coiled around the whole cover, with its head coming straight up to a roaring lion's head, symbolizing the struggle between the devil and Jesus.

When Showbread says "limited edition," that's exactly what they mean. In fact, only one thousand copies of the limited edition were printed. If you order a copy through their webstore, you'll get it autographed and hand-numbered. The casual Showbread fan would do great to even download a copy from the Come&Live! website, but for true, diehard fans, it's a must to get this special version. The bonus songs don't really add a lot for the album itself, but they are a delicious treat for those interested in hearing them (kind of like the scenes that play during the credits of an animated movie, like Toy Story 3). I'm not certain if these tracks will be available for download or not, but I'm sure they'll remain a bonus for buyers, as will An Awful Void. So get yourself a copy of the limited edition of Who Can Know It?, and experience one of the top albums of 2010 all over again.