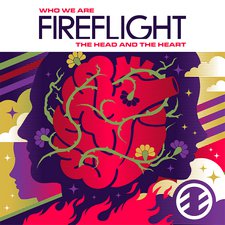 Fireflight
Who We Are: The Head And The Heart


The musical landscape has evolved quite a bit since Fireflight'ss arrival in the Christian rock scene in the early 2000s with their debut album, Glam-Rok (2002). Of course, they didn't really become a staple in Christian music until The Healing of Harms was released on Flicker Records in 2006. The humble beginnings started in Florida when Glen and Justin were forming the group during high school and later found lead singer Dawn Michele. There have been some very slight changes in sound over the course of their history, with the exception of their last major release, Innova, which ushered the band into a much more ambient, techno sound. In 2017, they would then redefine Innova with a remixed release, RE-IMAG-INNOVA before taking a break from the spotlight. Now, after five years since their last project, we finally have the long awaited album, Who We Are: The Head and the Heart, which combines two smaller projects into one collection.

On the opening track, one shouldn't worry they might have a compromised copy of the music as a studdered effect greets the listener in the introduction of the song, "Ready for More." This opening tune should bring a smile to the faces of longtime fans as it reminds the listener of the experience they had with unforgettable hits like "Unbreakable" in 2008. The song focuses on how one should not give up by moving forward while ignoring thoughts of self-discouragement: "I roll the window down/ to drown the silence out/ but nothings Louder than the voices in my mind/They say don't waste your breath because you've got nothing left/ you missed Your shot and now you can't turn back the time." The song later offers a glimmer of hope by saying "no turning back / this fight's not over." The next song, the highly energetic "Bang Bang," follows up with a similar message of optimism and faith. "How to Fly" is one of the highlights as it generates a very memorable rhythm and notable message about relying on God for guidance and compassion. Fireflight has always been known for their encouraging ballads and this is continued in "Keep Your Head Up," inspiring the listeners to stay the course and not become distracted with life's stresses.

If there's one consistency with numerous rock bands, it's having a song that captures the feeling of a rock concert with audience participation (something that seems hard to imagine amidst 2020's COVID-19 crisis). Sanctus Real did it with "Turn on the Lights," Switchfoot provided us with the anthem, "We are One Tonight," and Newsboys with "Wherever We Go." Now Fireflight brings the enthusiastic "Welcome to the Show" in the second act of this record. This is the type of song that almost feels like an advertisement for the live performance experience. A song like this could easily result in a very cheesy effort that falls flat. Thankfully, it resonates with just the right timing in lyrics and momentum to become a potential favorite among the tracks--especially as it calls out believers who seem to thrive on the Christian concert (and worship service?) high, but not live out the Christian lifestyle once they leave that setting. "Bury the Dead" provides a very engaging theme about the issues with regret and is somewhat reminiscent in style of the theme song ("Somebody Help Me") from the 2003 television series, Tru Calling. "I Believe You" begins with a nice acoustic introduction and provides a thoughtprovoking ballad about the inclusion of relatable life experiences that are not always experienced by one person exclusively. "Don't Let Me Go" closes with a noteworthy composition that brings some nice harmony from the background vocals during the chorus and features some compelling elements in the height of the song.

While they've managed to keep some of the techno sound from their last release, Who We Are: The Head And The Heart seems to bring a remarkable balance of rock and electronic fusion. As a listener since Unbreakable, I can honestly state that this is their best release as it is a very consistent album with many standout singles and was definitely worth the wait.