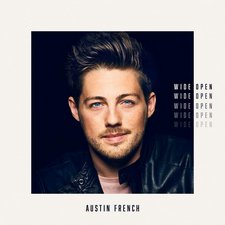 
Sometimes the word "pop" can be treated like a lesser thing amongst us music critics. (As in "that album's okay, but it was a little too pop".) However, it need not be so. A good pop song can be a part of a well-balanced musical diet. (Make sure to sprinkle in some classical music and a pinch of jazz now and again for maximum musical health.)

Case in point: new artist Austin French's debut album, Wide Open. From the rocking opening title track to the sober closer, "Spirit Speak", French pours out his heart against a modern "pop" backdrop of heavy, synthetic beats and distorted vocals. And in doing so, he makes a great case that pop can be both an engaging experience and a more creative genre than it gets credit for.

The title track, a duet with fellow CCM pop-rocker Matthew West, kicks off the album with a high-octane burst of natural beats and waves of epic keyboard sounds before French's distorted vocals take over in a personal statement of intention. West's vocals counterpoint the melody nicely, and "Wide Open" reaches for the proverbial ceiling; it's a great opener. Current single "Freedom Hymn" keeps the energy up, and makes good use of start-and-stop rhythms. French sings with gusto and conviction, and the track was wisely chosen for a debut single. Similar in theme to Zach Williams "Chain Breaker," this song ought to be the anthem of addiction groups everywhere.

Alas, "Why God" slips a bit in trying to go for creative wordplay with that title phrase (as in the question "why God?" and the statement this is "Why, God, I need you.") The song is otherwise well-done, and the attempt to turn a phrase too far around is forgivable for a young songwriter.

Fourth track "Born Again" rises above its pedestrian title and rocks out convincingly. With a touch of Imagine Dragons in the staccato, rhythmic delivery and powerhouse chorus, the song is the kind that is destined to soundtrack a few commercials or sports recaps (that's by no means a knock on the song; it's naturally cinematic). The distortion in French's vocals adds just the right touch of eeriness to the song. "I Need A Hallelujah" cribs a bit from Leonard Cohen's classic "Hallelujah" (a song that is covered ad-nausium on singing competition shows), but the mixing of the melody feels more like an homage to that classic song than anything else. "Good Feeling" channels a bit of OneRepublic in its club music beats and wacky bass lines, while "In America" is a sincere plea for revival that builds nicely over its simple piano refrain, "If you hold the world in your hands / if the lion lays down with the lamb / Oh, I know it's dark today, but still / I see that shining city up on a hill." A song like this can often be jingoistic and one-sided, but French does a nice job of showing a humbleness and grace in the lyrics.

Wide Open is a thoroughly modern, energetic, rhythmically stomping album that brings to mind the stuttering, distorted vocals and beats of Imagine Dragons and the soulful, sly modern pop of OneRepublic (as well as a dash of fellow popster Jordan Feliz). With a driving, propulsive vibe and many terrific songwriting and vocal performances, it may be the best debut album of the year. The album's few, minor missteps aside, it's a full-throttle pop ride that doesn't reinvent the wheel, but nevertheless sounds great and encouraging whether being played at the gym or on the commute home. And that's no small thing indeed.