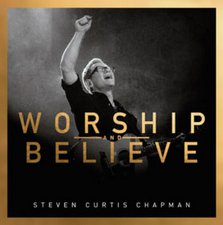 It was seventeen years ago that Steven Curtis Chapman, already considered an all-time great by 1999, released his landmark album Speechless, which started a wave of inspiration that Chapman has been riding ever since. Every album released after Speechless was covered with its distinct fingerprints; Declaration was a nearly-equally good carbon copy, All About Love was the softer side of Speechless in the form of love songs, All Things New was Speechless in a more raw and eclectic form, and so on. In short, Chapman had essentially patented a formula (with the obvious exception of Beauty Will Rise). But Chapman is such a good songwriter and naturally creative musician that his music never really felt formulaic. It was personal. It was poignant. It was romantic. It was worshipful. And he churned out success after success without truly retreading old ground. But I think something changed after The Glorious Unfolding. There were too many hints of the past, lyrically and musically, and the formula seemed to become more obvious than ever. And I speculate that Chapman felt it too, as did the people on his label. Which is why I believe Chapman decided it was finally time to do away with the Speechless formula and move into possibly the most treacherous waters imaginable in the realm of Christian Music; congregational worship.

And that finally brings us to Worship and Believe.

Contrary to popular opinion, an established non-worship artist making a mainstream worship album is about as risky a move as one can make, due to the copious amounts of mediocre talent oversaturating the market with (for the most part) carbon copies of Hillsong, Tomlin, or whomever unexpectedly broke out with a big hit single/Sunday morning favorite. But Chapman comments that one of the reasons he felt like he could add something of value to the realm of worship music was that he thought he was independent of the differing factions of the worship community. He says, "I'm not a Passion artist or Bethel artist or Gateway. I thought, 'What if I were to bring all those different communities together musically in a way to create this project?'" The project and its title was inspired by Randy Frazee's "Believe" curriculum, a follow-up to "The Story" that was so wildly popular a few years ago. The idea of the curriculum was to unite believers and engage them with and apply the beliefs in the Bible, and discuss and challenge them as to why they were so important. Each song in the project tackles an aspect of the curriculum, ideally pulling together into one cohesive whole to unite a diverse body of believers. Enlisting the help of a bevvy of successful worship artists, Chapman's resulting album presents possibly one of the most interesting case studies in Christian music in recent years.

The first thing worth mentioning about Worship and Believe is the dramatic shift in writing style on Chapman's part. First of all, the singular pronouns ("I," "me," and "my") are virtually nonexistent, wholly replaced with plural ones ("us," "we," and "our"). Also, all the songs are sung vertically, like direct prayers to God. What this shift says to this reviewer is that Chapman is focusing this whole project on the direct relationship of the Church and God, re-emphasizing the point that this music is meant for congregational, rather than personal, worship. In theory, this is great, and breaks a familiar "me-and-God" trend in worship to move outside oneself into the church. The problem is that Chapman's greatest artistic appeal was the personality and intimacy of his lyrics, and he has completely hamstrung that strength with this approach. What we are left with is, for lack of a better word, mediocrity.

Now, don't get me wrong. These songs don't have bad lyrics. Chapman didn't forget how to write a song well. And in fact, from a worship standpoint, there isn't a thing wrong with them. Chapman sings truth, and highlights many things that God deserves praise for. The songs will work great in a Sunday morning setting, and "One True God" is absolutely destined to be a future favorite (a few others may get there too). I have no issues with the theology, nor do I have issues for the people who wholeheartedly will use this music to praise God. But I do have several issues -- some fairly general, and some rather specific.

The most obvious criticism, as is the case with almost every mediocre worship album ever, is that the lyrics that seem overly familiar. Who hasn't heard lines like "We believe we believe / You are good / You have conquered the grave / Taken our sin away" or "For everything you are / For everything you've done / we sing for you / with every breath alive, you're breathing into us" in their worship music before? And I could point out a few more familiar lines from almost every song. On a more specific note, a few lines and titles just seem out of place or awkward coming from Chapman. The opening verse quoting 1 John 3:1 ("How great is the love the father has lavished on us that we should be called children of God") was previously used, word for word, in Chapman's 2001 hit "God Is God. "The Body" borrows a lot of lyrical ideas from the old Tomlin/Passion hit "God of This City" to a distracting degree. And the fact that both "We Believe" and "More Than Conquerors" are both the titles of very popular songs from the past couple years (from the Newsboys and Rend Collective, respectively) also increases the awkwardness level. But possibly the biggest headscratcher for me is that two different songs ("Amen" and "Who You Say We Are") contain the lyric "and all that we can say is," both sung in a very similar context, and then ironically proceeding to "say" two different things ("amen" in the former and "thank you" in the latter).

On the other hand, from the musical side of things, Chapman's conduct is at worst a lot more forgivable, and at best quite good. While "One True God" screams of Chris Tomlin (both lyrically and musically) in both the best and worst possible ways, on every other song, Chapman fearlessly navigates treacherous waters to put out a fully congregational set of Chapman-flavored tunes. "Amen" is as lively and fun musically as recent hits "Do Everything" or "Love Take you Over," only in a classic congregational four-chord structure. "More Than Conquerors" provides an admirable beat and wonderfully balanced hook. "Sing for You" is really only a pedestrian chorus away from being the highlight of the album. In short, Chapman does everything he can to prove that even undiluted vertical prayers in the four-chord structure can be as natural, unpretentious, and creative as a great pop/rock album. The only real issue with the album musically is that a few later songs feel like little more than simple callbacks to earlier songs on the album. "We Are Listening" and "More Than Conquerors" share almost exactly the same structure, and "Sing For You" and "God of Forever" also feel too similar. Also, "Hallelujah, You Are Good," while definitely a worthy and touching song (reminding this reviewer a lot of Beauty Will Rise), feels very out of place among all these songs of vertical worship.

With Worship and Believe, I think the big creative misstep for Chapman was attempting to release a project full of music designed for congregational/Sunday morning/church/communal/group worship (call it what you will), rather than making a worship project with less restrictive confines. Just last year, Third Day made their first all-original studio worship project and it was very stellar mainly because they didn't strictly limit themselves to a congregational setting. Phil Wickham has made several praiseworthy albums the same way, as have several other artists like Crowder, John Mark McMillan, or Kings Kaleidoscope. I am convinced that Chapman can write a wonderful album with both creative integrity and congregational appeal; he is way too good of an artist not to.

So, there you have it. There is a lot to say when an artist makes a radical departure from his normal fare to make an album like this, but a worship album is a worship album, and whether sung by Chapman or your local church's worship pastor, you know pretty much what you are going to get. If what you want is simply a worship album sung by the incomparable Steven Curtis Chapman, I'm sure you won't be disappointed. However, if you want a high quality worship album that separates itself from the pack, perhaps you should pass on this one.