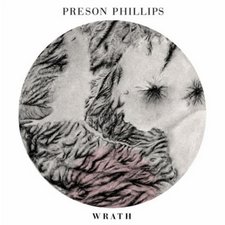 One of the more active artists on the Come&Live! roster is the worship leader Preson Phillips. With two albums out since 2008, he's not stopped writing and recording songs, not only for church at Watermark in Tampa, Florida (where he's the resident worship leader and pastor), but also for his fans who anticipate each new album. Earlier in 2011, Phillips became an officially ordained minister while also collecting a new batch of songs for his third release through Come&Live! called Wrath.

As with Phillips' previous two albums, Wrath is a beautiful collection of worshipful songs performed in a folk and indie style. Phillips is extremely skilled on the acoustic guitar, so you can expect lots of seamless strumming ("A Love All Excelling") and excellent licks and melodies ("It Lives, It Speaks, It Pleads"). Underoath's own Tim McTague is present once again on Wrath, playing the electric guitars you hear. They're never on the Underoath level as far as intensity, but they're always very fitting (though the last five seconds or so of "His People Run Free" do start to rock, it's only short-lived; part of me was hoping it would go on a little bit longer, though I still really enjoy the softer sounds they produced on the rest of Wrath). Some of the tracks, such as "Wandering Soul" even have some cool effects added to McTague's guitar. The whole band works wonderfully together, with each instrument working cohesively to create solid indie folk music. There's an apparent chemistry between the band members that only adds to the already great music.

In addition to McTague's guitar playing, he is also responsible for the recording, mixing and production. And his work on the technical side of things is just as good as his work on the instrumental side. If you didn't know that Phillips was an independent artist, the sound quality of Wrath certainly wouldn't hint at it. None of the instruments seem to overpower any of the others; each one gets plenty of shine, especially when the song specifically calls for it. In "Wandering Soul," you have an acoustic and electric guitar, among other things, mixed together perfectly. Then the song goes into a part that sort of works as the bridge, with Phillips singing "I've tasted, I've seen how a man can be free." When he starts singing, all of the instruments except the acoustic stop playing, leaving just the acoustic and Phillips' vocals (as well as co-vocalist Rachel Collins). It would've been good had they left all the instruments running during that part, but I think dropping it to just an acoustic and Phillips' voice made the section even stronger.

One of the intriguing parts of Phillips' songs is that a lot of them are written like hymns; some of them use Olde English grammar and vocabulary. "A Love All Excelling," in addition to the title itself, uses lyrics like "Breathe, breathe, breathe o' the breath of Thy Spirit, let us all of Thy mercies inherit, bind us in Thy waking rest, bid us all assemble now at Your behest." He also uses fantastic imagery to describe the redemption of God in "His People Run Free": "Prisoners lift now your timid heads, the fields and the forests once brown are dead and awaking!" Overall, Wrath focuses on the might of God, and His eternal victory that He gives freely to us all. The chorus of "Am I Yet Alive" celebrates what God can and does do for His people: "I come alive, grace has won me over as hope survives, my soul has found its lover, a love collides as He becomes my sufferer, and am I yet alive!"

After Preson Phillips' first album, The Observant & the Anawim, I knew I would be a fan of future albums. While Weep...He Loves The Mourners' Tears was good, it didn't quite hit me the way the first album did. But Wrath is easily the best album he and his band have released to date. If you like artists like Mumford & Sons or John Mark McMillan, you're almost obligated to get Wrath. It will be a free download from Come&Live!, but not upfront. There will be physical copies available to purchase, as well as digital copies on iTunes and Amazon, that will raise money for a fundraiser for Watermark. The free download will come later. But if you can spare a few bucks, you shouldn't wait.