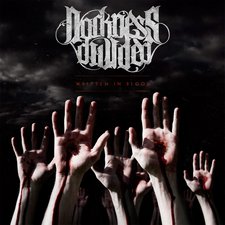 While not a Christian label in any way, Victory Records has a long history of signing the occasional Christian acts in addition to the bigger-name secular bands that usually populate their roster. Some recent Christian bands that found their way into the Victory fold are Close Your Eyes, Corpus Christi, and These Hearts. Now, San Antonio metalcore act Darkness Divided join these ranks with their debut LP, Written in Blood.

At first listen, Written in Blood seems like a fairly typical metalcore album. There's the expected harsh vocals in the verse followed by clean vocals in the chorus. There are a variety of breakdowns scattered throughout. There are plenty of simple, chugging rhythm guitar lines as well. If I didn't have to listen to the album multiple times for the review's sake, I may have never gone back to Written in Blood for a second listen, simply because it seemed so typical.

Nevertheless, it's the small details that really separate Darkness Divided from a lot of similar acts. One of the biggest things this album has going for it is some really solid lead guitar. This is an area that many metalcore acts neglect, preferring to focus on an overload of chugging rhythm guitars and breakdowns. Darkness Divided don't settle for that, and instead sprinkle some really compelling lead lines throughout the album. They even go so far as to throw in an honest-to-goodness guitar solo in "The Hands that Bled," and "Divine Mercy" is a great example of an effective lead line.

In that sense, perhaps the strongest element of Written in Blood is the songwriting. It's all too common for metalcore bands to release albums where every song sounds an awful lot like the one before it. Written in Blood avoids this problem fairly well, and consequently, it doesn't get boring nearly as quickly as many other albums do. The only songwriting elements that are perhaps under-developed here are the chorus melodies. For the most part, they aren't particularly memorable from track-to-track, which makes many of them seem like a compromise when compared to the ferocity of the verses. The one notable exception to this is "Withering Kingdom," where the chorus has a melody strong enough to make it as musically epic as the rest of the track.

I was pleasantly surprised by Written in Blood once I had spun it a few times. While it seemed a little too generic at first, it developed into a well-rounded, diverse metalcore album upon multiple listens. It isn't a game changer by any means, but it's a really solid release that will deserve a spot in any metalcore fan's rotation.