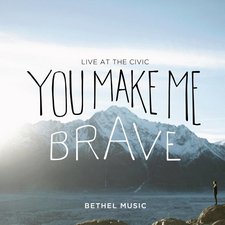 Bethel Music
You Make Me Brave

For one paying attention to trends in Christian music over the years, the rise of denominational movements and mega churches writing and producing their own worship music ranks high on the list of notable stories. Starting in many ways with Australia's Hillsong Church (with hit songs like "Mighty To Save" and "From The Inside Out") and reaching across the globe to churches in the British Isles and in the USA, many large churches have created their own set lists of completely new material and in-house liturgies. Together with record companies, many of these movements and individual churches have released yearly volumes of new songs and concert recordings. Examples of this are releases from North Point church in Georgia, Elevation Church in North Carolina and Bethel Church in California. With high sales of these types of releases (due in part to a built-in audience and small television exposure on the upper region of your cable box), they are a bit of a sure bet in an otherwise bleak album sales environment.

Bethel Church in California has released an impressive number of releases in the last few years, and the high volume of original material is to be admired. You Make Me Brave is the organization's second live release of the year, and depending on your taste for these sorts of recordings, it is a fair representation of what a worship service at one of the church's many campuses might be like. But as a stand-alone piece of artwork, You Make Me Brave, falls into the same sort of traps that mar many worship releases of this sort, like the repetitive nature of the phrasing and musical accompaniment or the crowd cheering and sometimes silly applause-grabbing statements of the worship leaders. (You know, the typical "I could say anything right now and the crowd would cheer" type statements.) To be fair, these problems exist in secular live-concert recordings as well. It often times comes down to the old phrase "you had to be there."

With that in mind, You Make Me Brave is perhaps a fine documentation of a night of worship at your local mega church. The opening title track builds nicely with a lyric that pays homage to last year's Tides release, using ocean imagery (something that California has a lot of) to spur the worshiper to contemplate living a life of bravery by walking out on the waves and not staying on the couch where it is safe. "Anchor" continues this nautical theme, and is among the better melodies offered here. "We Dance" slows things down a bit and offers a needed bit of reflection in the flow of worship.

In the end, it can be hard to know how to approach these types of recordings from a review perspective. You Make Me Brave sounds very similar in tone to the many Hillsong live releases, and takes many of its musical cues from them. There are not many stand-out songs here, and the production sameness gets hard to bear at times. But the passion of the musicians does come across, and for the genre, there are a few nice moments here that inspire. So depending on your taste and experience for this type of musical presentation, You Make Me Brave could either be a welcome bit of music in your home or car, or a bland bit of sameness that will no doubt get repeated again this time next year.

For this reviewer, You Make Me Brave falls somewhere in between.