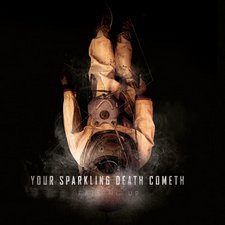 Falling Up
Your Sparkling Death Cometh

We have been blessed in the last couple of years to see several landmark bands return from retirement. The most recent and perhaps most exciting of these is Falling Up. After releasing the excellent but virtually ignored Fangs, the band quietly split up and that seemed to be the end. Fortunately, it isn't. The boys of Falling Up have returned with a bang with their new independently released album, Your Sparkling Death Cometh.

Falling Up's history is an interesting one, as their musical style has evolved dramatically over the years. The band initially garnered acclaim on their first album, Crashings, for a hard, driving grunge/rapcore hybrid that appealed to the teenage crowd. With the band's third album, Captiva, they started to bring things down a notch and move towards a more synth-influenced ambient sound. Their final release until now, Fangs!, took the ambient sound to a further extreme and was a concept album telling a science fiction/fantasy story created by frontman Jessy Ribordy. This brings us to Your Sparkling Death Cometh, which takes influences from previous albums and creates a unique effort that is nothing less than excellent.

Sonically, Your Sparkling Death Cometh takes the wandering synth soundscapes of Fangs! and combines them with more traditional rock elements from earlier albums. The result is a sort of epic progressive rock album very similar to the sound pioneered by secular rockers Coheed and Cambria. The tracks have traditional rock structures, but they are not in a hurry to reach a musical climax. Rather, they develop slowly and gradually, as the various pieces of the song come together to make a whole. This is combined with substantial instrumental outros and results in an album where every track is over four minutes long, with several breaking six minutes. While this album may not produce any great radio tracks, it is actually surprisingly melodic as a whole. "Diamnds" and "Oceans" are both beautiful, slightly romantic ballads that are perfect for Jessy Ribordy's vocals. Meanwhile, "Circadian" and "The Light Beam Rider" are firebrand, high energy rockers. Ribordy's vocals do occasionally strain in the latter tracks, but he is excellent throughout. Drummer Josh Shroy is also deserving of mention for his excellent performance, especially on "The Light Beam Rider."

Lyrically, the album appears to be a continuation of the story begun in Fangs! As before, it's difficult to discern the details of the story specifically, as the lyrics tend to be somewhat vague. But at the same time, there are also important Christian elements scattered throughout the album. For example, "Blue Ghost" states that "Grace comes like a thief in the night, it comes like a thief in the night. It blooms in the weak and the blind." The idea of grace is mentioned in other places, as well as the importance of faith.

We are very fortunate that Falling Up has returned to us. While their already well-established discography is excellent, Your Sparkling Death Cometh is a simply fantastic album that could top anything this band has produced before. It is both powerful and sensitive, and features a wonderful carefulness in both songwriting and performance. Old-time fans of the band may still wish fondly for Crashings and Dawn Escapes, but there's no getting around the fact that Your Sparkling Death Cometh is some of the tightest, most thoroughly developed music we've ever heard from Falling Up.

We have been blessed in the last couple of years to see several landmark bands return from retirement. The most recent and perhaps most exciting of these is Falling Up. After releasing the excellent but virtually ignored Fangs, the band quietly split up and that seemed to be the end. Fortunately, it isn't. The boys of Falling Up have returned with a bang with Your Sparkling Death Cometh. Sonically, it's similar to Fangs but not as randomly adventurous. What it is, however, is an epic symphony of music reminiscent of secular progressive rockers Coheed & Cambria. This is an album that demands to be enjoyed as a whole, and the band justly gives each track ample time to develop. These are songs that aren't made for quick radio sound bites, but deserve to be enjoyed in their entirety. Falling Up is back, and Christian music is better for it. - PReview date: 6/20/11, written by Timothy Estabrooks of Jesusfreakhideout.com --->

Falling Up is back with their fifth project, Your Sparkling Death Cometh. Fangs was rather hit-and-miss with loyal fans and alternative fans alike, thanks to the fact that Falling Up's musical experiments went down too many rabbit trails. But while Sparkling Death has a similar vibe to Fangs, it leans on more organic instruments than the electric guitar-driven Fangs. The album opens with "Circadian," which manages to be the most dramatic and epic first track in Falling Up's career as it utilizes the cello and the bass to their peak compacity. Although the tempo isn't as rocky as Crashings or Dawn Escapes, "Wonder," "Blue Ghosts" and "Light Beam Rider" are catchier alternative tracks which stand apart from each other. Both "Diamnds" and "Oceans" have a unique, inspirational sound for Falling Up as they act as the antithesis to Falling Up's dark and brooding tunes. Although the project is beautifully crafted throughout, after the sixth song, the listener must focus more energy to enjoy the music. And, though the album is over fifty minutes long, some of the length can be attributed to the instrumental outros found in nearly every song. The science fiction/fantasy story of Fangs is utterly replaced by individual songs themes. Although Falling Up still retains their belovedly vague lyrics, there are vivid spiritual metaphors among the other spiritual ambiguity. The singer claims to want all who God is on "Diamnds" and one could almost see "Oceans" landing on a worship compilation ("If your heart's an ocean/then I will drown"). As far as comebacks go, Your Sparkling Death Cometh is one of the very best. It's both intriguing and addicting and will almost certainly be heralded as one of Falling Up's finest albums, if not their finest. Fans of Captiva who were alienated by Fangs should give their ear to Falling Up's resurrection. - Nathaniel Schexnayder, 6/26/11