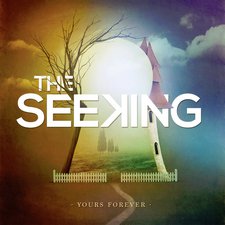 The Seeking
Yours Forever

It's not uncommon for a CD to have a sticker on the shrink wrap claiming you will like this band if you like "these" bands. Normally they list perhaps three of the current top bands in their genre in an attempt to draw in as many fans of those bands as possible. Yours Forever, from The Seeking, was not one of these. It had such a sticker, but it proclaimed you would like this band if you were a fan of Of Mice & Men, Saosin, or Maroon 5; it's an interesting assortment to say the least. Were they simply trying to draw as large of an audience as possible, or are The Seeking similar to all three?

Yours Forever starts off with some down tuned guitars and some growling in "Only A Moment" before the clean vocals come in. This is the pattern throughout the album, with a very nice balance between the two. The screams and growls aren't anything unique, but are of a very comfortable, mid-pitch variety. The real highlight here are the clean vocals. They are slick and poppy with a very nice range and they aren't really that similar to any other post-hardcore band.

Instrumentally, it is satisfying if not spectacular. The title track, "Yours Forever," features a guitar solo, and the instrumentation feels more technical in general compared to other poppy post-hardcore bands. "Only A Moment" and "Restless" feature some well-placed electronics, while "Take It From Me," among others, features breakdowns that again are well-timed but not spectacular. Lyrics range from worshipful to being about relationships and are typically well-written. Perhaps the highlight is the way a paraphrase of an old hymn is worked into "Restless," "Peace like a river, come my way," in such a way as to neither feel forced nor cheesy.

Overall, this is a very good album with a surprisingly fresh sound. With all the bands attempting to fuse electronic music, pop, and hardcore, it is nice to have a Christian band doing it in both a unique and high quality way. However, while there are no glaring flaws in the album, it lacks any element that will draw you back time and time again. It's a fun, light post-hardcore album that most likely has limited replay value. However, it is The Seeking's first album, and they already seem to have found and polished their sound. If this is only the beginning, the future looks very bright for this band.