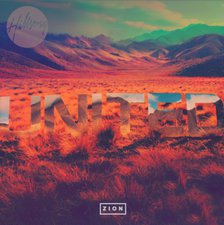 Through the years, listeners have received multiple offerings from the Australian mega church, Hillsong. They have produced some of the most congregational contemporary songs that are sung around the world while also producing some of the most mundane songs as well. However, after Hillsong United's last release Aftermath, there were some blazing improvements that seemed to be signs of change. With their latest album, Zion, there is not just change, but a complete overhaul.

The album opens with the electronic-driven "Relentless." Musically, this sets the stage for the entire album, which is a great thing, with the synthesizer and bass filling every crevice of the track. Vocally, Matt Crocker is at his finest and the harmonies compliment his sound so perfectly. Seamlessly, this transitions to the tribal yet militant sounding "Up in Arms." Lyrically, the song expresses the believers' response to the grace and beauty of Christ. This theme is echoed in the songs "Stay and Wait," "Mercy Mercy," "Heartbeats," and "A Million Suns." But each track is distinctive in nature and delivery, making them all very enjoyable.

"Scandal of Grace" introduces the soft sounds of United as the acoustic guitar simply strums while Crocker sings, "Grace what have you done. Murdered for me on that cross the scandal of grace, you died in my place, now my soul will live." It truthfully is some of the most poetically sobering lyrics that the group has written to date. "Oceans (Where Feet May Fail)" continues with a more intimate tone and will surely grasp the heart of the listener as the song reiterates, "Spirit lead me where my trust is without boarders, let me walk upon the waters wherever you would call me." The music builds and builds to a gorgeous climax that will pull on your heartstrings whilst being encouraged by the faith that only the Holy Spirit can give.

An incredible highlight is "Love is War," featuring United veteran Jad Gilles. The track's assertiveness is excellent and bears a passionate chorus that is sure to have listeners wanting to lift a clenched fist in the air. Paired up with this track is "Nothing Like Your Love" and the title track, "Zion." Listening to them all together, it feels as if they are just movements within one large composition - which makes this portion of the album that much more special.

The album concludes with another pairing of sorts--think cheese and fruit--with "Tapestry" and "King of Heaven." The former delivers a more organic sound that sings a simple praise of how delicate yet strong the grace of God is and how it is weaved into our lives. The latter and final track is a magnificent conclusion to the album that sings of Christ's tearing of the veil between God and His creation. Either one of these tracks could have concluded the album, but I'm glad they chose the way in which they ended it.

As a special treat, listeners should skip buying the normal edition and should instead get the deluxe version. Tracks like "Arise" and "Mountain" offer something outside the musical realm of Zion but fit in well with the collection. Plus, the remixes are very unique and creative.

Simply put, this album is pretty amazing. From beginning to end, if you can't find anything to like then you probably aren't sure what you're looking for in the first place. The production is so well executed that, honestly, you might even question if you purchased the right album because this ain't your old-fashioned Hillsong. If this album is the new standard in "typical" worship music, or music in general for that fact, then it can only go up from here. Well done, Hillsong United, we tip our hats to your art.

- Preview date: 12/30/12, Review date: 2/24/13, written by Ryan Barbee of Jesusfreakhideout.com class="coversize" align=right> Early Thoughts...
There are three things in this life that you can be sure of. One: Taxes. Two: Death. Three: At least three albums released each year from Hillsong. Some people love this, while others are infuriated by it. However, with 2011's Aftermath from their youth worship team UNITED, fans and haters alike could not deny that that album was something very fresh from the contemporary worship staple. One of the first releases of 2013, Zion, is beyond refreshing - it's unique. Hillsong UNITED has basically reinvented themselves, and the changes are amazing. Musically, this album goes where many would fear to tread and lyrically it's creative and approachable. Come one, come all - loyal fans and committed cynics; Zion will be a great way to start off the new year... --->

Over their fifteen-year recording history, Hillsong United has released a boatload of live albums, most of which sound nearly identical. But they've also released a couple of studio albums, where they've shown potential as a band of musical artists. Their last such album, Aftermath, had this decidedly non-Hillsong fan tipping his proverbial cap a little, and with 2013's studio album, Zion, the cap is tipping just a little bit more. Where Zion first earns points with me is that it reminds me quite a bit of Lovelite's latest album, In Three Persons. Some 80s pop era synth is used throughout, combined with thoughtful indie pop that makes it a real treat to listen to. The second set of points that Zion earns is due to the lack of any songs along the lines of previous United songs like "Go," "Freedom Is Here," or "One Way." No, United admirably steers clear of the fast pulse-inducing, marshmallow fluff tracks, replacing them instead with smart songwriting and a stronger emphasis on worshipping Jesus through art than merely with nice words about Him. Of course, the opening track "Relentless" may make a valid case for a rebuttal of that statement, but musically, the new wave influence overpowers the powerpop. Now, with all that being said, this is still Hillsong United. Despite the different sound, it's easy to tell that this is the same band we've gotten to know. The beginning of the album is especially telling, but all throughout Zion, we hear melodies and lyrics that have fallen right off of the Hillsong tree, just in much less abundance. The first two tracks, "Relentless" and "Up In Arms," are the worst offenders, but I use the term very loosely, as they're still decent and listenable. The highlights of Zion include "Stay and Wait," "Nothing Like Your Love," "Arise," and the deluxe edition remix tracks (for lack of a better term). If you're like me, and the only United album you've even remotely cared for is Aftermath, you'll want to check out Zion. Not only is it the best album United has ever released, it's one of the best mainstream worship albums I've heard in a long time. - Scott Fryberger, 2/16/13