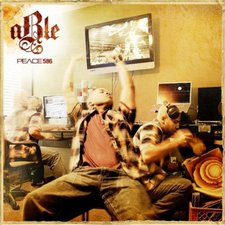 Back in the day, when Tooth & Nail still had their hop hop sister label, Uprok Records, they had a lot of artists that were consistently putting out music through the label. When Uprok more or less dissipated, so did some of the artists, while others kept putting their stuff out there. Some took the independent route, while some went on to bigger labels, like TobyMac's Gotee Records. The rest followed the former Uprok president and A&R manager (and Sphere of Hip Hop founder and owner), Josh Niemyjski, when he left and created illect Recordings. Among these illect artists is Tunnel Rat producer and emcee Peace 586.

Peace's latest release is a follow-up to his 2009 beat tape, heAr, called aBle. aBle is a 17-track mix that is essentially the same kind of release as heAr. It's designed to showcase some of Peace's production skills and give the listener a taste of the kind of beats he makes. For the most part, while Peace keeps the production at a respectable level, the beats are pretty raw, bearing the west coast vibe that was so common in the Tunnel Rats' music. It's full of pretty laid-back beats that make for great background music if left without vocals. But also, as some of the songs demonstrate, they're great for Tunnel Rats-style rapping. Before you finish listening to aBle, you'll get a big dose of TR action, with guest verses from Propaganda, Sev Statik, Jurny Big, Shames Worthy, Griffin and Sojourn. There's a few of the Rats missing, but overall, aBle gets really close to doubling as a beat tape and an unofficial Tunnel Rats release.

Peace keeps the beats tight and toned down, and also pretty thick on occasion, like "Nevadat!" with its real nice boom bap that feels slightly old school, or "Spilt Milk," which shows off Peace's urban and underground hip hop leanings. I also like the Spanish guitar and heavy usage of high hats in the track "Sseneltneg," which may be my favorite beat on the mixtape. My only real problem with the beats on aBle, which isn't a big problem by any means, is that some of the tracks go on a little too long. Peace does a pretty good job keeping the instrumental tracks within a two-to-three-minute timespan, but some of them do go on a bit longer. Even the shorter tracks feel kinda repetitive when they don't have anyone rapping over them. Fortunately, some of the instrumental tracks do feature some quiet vocals, presumably from Peace himself, speaking either praises to God or reciting straight from Scripture, which not only brings a bit of a worshipful vibe to the hip hop music, but also helps the tracks to not feel so repetitive. "Sweet Sound" contains a re-imagined version of the worship song "I Love You Lord" ("I love You Lord, and I lift my voice to worship You, let it be a sweet sweet sound in Your ear"), which is sung with somewhat of an R&B style over a peaceful, yet slightly quicker, beat. In addition, I do find some of the guest verses to be a little underwhelming, and quite frankly, forgettable. Most of the guest verses are well-done and really tight, but a couple of them just don't really strike me as interesting.

Before I really got into hip hop, when I only liked a select few hip hop artists who were more well-known in the Christian music industry, Peace 586 was one I had trouble really enjoying as I listened to his music. For those who aren't really that into the lesser-known, more underground hip hop artists, aBle most likely won't be right for you. If you bumped the Tunnel Rats back in the day, or any of the Tunnel Rats' solo albums, like the latest from Sev Statik or Shames Worthy, you'll probably be a fan of Peace's latest joint. You can hit up the illect Recordings Bandcamp store to get your download for a pretty good price. It took me a few listens to really appreciate aBle, but it's worth investing the time.