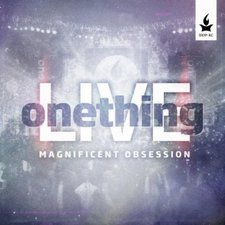 Praise and worship is not my area of expertise, but after attending 2012's Freshwind Youth Conference, and hearing the incredible passionate music of Kansas City's International House of Prayer, led by Cory Asbury, I couldn't resist tackling their newest live album, onething Live: Magnificent Obsession.

Recorded at IHOP's onething conference in December of last year, it highlights what are considered some of the most memorable songs. For those who don't know, the International House of Prayer serves one main purpose: to send up praise and prayer to The Almighty God twenty-four hours a day, seven days a week. Their unofficial stamp by some being, "Heaven loves parties," any who have experienced them live know that much of their music is just that: party worship.

As the first few tracks exemplify, Magnificent Obsession features one singular theme: that Jesus is a worthy obsession. As one of the worship leaders featured, Matt Gilman, shares, "I love the focused nature of this album and that it represents so well why we do what we do here at the house of prayer-because Jesus is worthy of unceasing adoration." It is difficult and possibly wrong to scrutinize a worship album such as this, not just because each song was recorded live, but moreover because this is music for the heart, for the worshiping soul, not the scrutinizing ear. If I were to judge its quality in the same way as most albums, I would shudder at the criticisms I would be forced to point out.

Most of those points would be moot, as Magnificent Obsession appeals to the hot-blooded worshiper, the dancer caught up in the wonder and the praise, the sweat and tears and sore throats that come with the compulsion to dance and scream the name of Jesus with all your breath.

One should know however, that because of that intention, to a strict music fan this album will go unappreciated. IHOP has enlisted eleven of their most popular worship leaders to compile a very diverse collection of worship music. I myself don't even care for all of it, but for the most part the differences are in the singing styles of each worship leader. Zach Simms' "Eyes To See" sounds like it flopped out of an older decade's rock and roll sector. You can also find the sultry offerings in Jon Thurlow's "Storm All Around You" that could rival Switchfoot or Kutless' best praise songs, as well as two tracks from Misty Edwards, whose style of worship is always in a flux between practiced and spontaneous.

And as most of the tracks on the album surpass five minutes in length, someone merely listening to the music could get a little tired. If not experienced as advised, this is an album of long, dragging worship songs which, because of the diversity of contributors, may only feature a few songs that please each ear. But to get caught up in the noise, playing in the background of time spent with your Maker, falling into the atmosphere and just praising, that is the intended purpose of Magnificent Obsession. And in that aspect, they have succeeded.