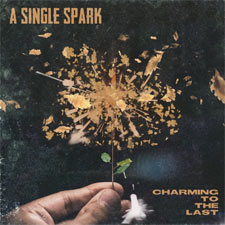 Charming to the Last
A Single Spark


Indie band Charming to the Last is back after a full two years since their debut, with a new album, A Single Spark. Ben Bourque, Christian Monteith and Alex Arthurs are the friends that make up the indie pop/rock punk band affectionately labeled as "dad punk." Well, this dad certainly enjoys their sound anyway. With their newest, we are treated to more of their melodious, vocally pleasant, earthly relationship-focused music, through a tracklist of thirteen songs.

The Mae-like vocals of "Wave of Regret," and the heavily Relient K-influenced tunes (from the Mmhmm era) "Illusion of Freedom," "Desperate Times," "Rabbit Hole," and "Long Road From Nowhere," are all highlights of the album. The driving guitars and manic speed drumming of the latter two songs especially pay homage to a clear influence on their sound. And the rest of the record is solid as well. While the aforementioned tracks are my runaway favorites, there isn't a bad apple among the bunch when it comes to the sonic palate.

On their 2020 debut, It's the Little Things, my biggest critique (albeit a small one) was that the lyrics trended toward the cliches of the pop/punk genre. This time around, I was hoping for some growth, a little depth to add to their musical muscle. Unfortunately, this time out, it's more of the same with an added bummer of song-after-song remaining on the surface level. There's a story of heartbreak and confusion here, but it remains far too cloaked in vague struggle and angst to fully latch on. Add to the ambiguous nature of the lyrics a deficit of hope, and I'm largely disappointed with what could have been a great album. Is it still worth listening to for yourself? Absolutely. It's just something I couldn't get past.

All in all, there's more than half an album I can fully recommend here, but A Single Spark is only a minor step in the right direction of growth from their debut. With added depth, greater glimmers of hope, and a continued honing of their sound, Charming to the Last may fully win this reviewer's heart, but for now, it's still a relationship in progress.

Canadian punk rock band Charming to the Last is back with their sophomore album, A Single Spark. This ambitious 13-track offering seeks to tell a story (complete with tracks that let the listener know when the next act is starting) about a man leaving his wife/family without warning, the mental anguish he faces, and his slow return. All of this is served with a healthy dose of alternative/punk rock elements. From crunchy, frantic guitars to sudden time changes, the group takes a sound often used to sing about breakups on a boyfriend/girlfriend level and ups the ante with a higher-stakes situation. Surprisingly, that application works really well.

Act 1 (the longest of the three) is all about the leaving, with the singer constantly waffling between absolute certainty that he's making a good decision ("Breakaway," "Illusion of Freedom") and doubt over his recklessness ("Waves of Regret," "My First Mistake"). Eventually that doubt turns into internal conflict in Act 2 as he starts to recognize where he went wrong ("Desperate Times"), how he needs to change ("Bury Me"), and how hard it's going to be to escape the pit he's in ("The Rabbit Hole"). Act 3, then, is the bright conclusion with the title track denoting his turnaround, though he openly acknowledges the road ahead will be hard ("Long Road from Nowhere," "I've Got This Figured Out").

A Single Spark is an impressive endeavor overall, with different musical movements and cues as well as lyrical references and ideas that interweave between tracks. That said, in spite of its bright conclusion, there's plenty of darkness to work through before you get there. In one sense, it makes for a good story, but given what the story is about (a rough patch in a marriage, if not divorce) some may find it a heavy listen that can be pulled out every now and then, but not daily. Still, lovers of a 2000s-era punk rock style will want to check out Charming to the Last. They will likely find the group (and their work) pleasing company.